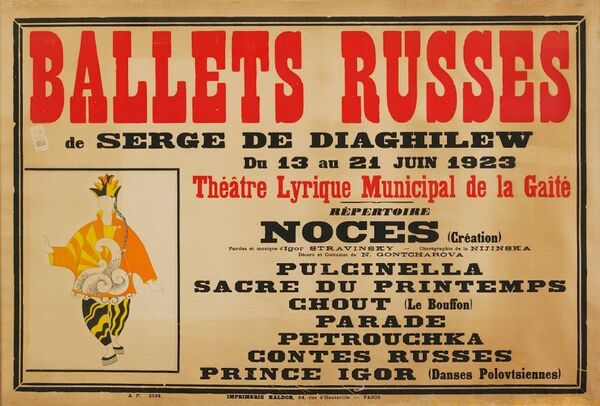 © Photo : V&A, London
Subscribe
Russian art impresario Sergei Diaghilev, who founded the ground-breaking Ballets Russes in Paris in the early 20th century and gave then unknown artists their first break, including composer Igor Stravinsky, is being celebrated in Washington with a multimedia exhibition at the National Gallery of Art.

WASHINGTON, May 10 (by Karin Zeitvogel for RIA Novosti) – Russian art impresario Sergei Diaghilev, who founded the ground-breaking Ballets Russes in Paris in the early 20th century and gave then unknown artists their first break, including composer Igor Stravinsky, is being celebrated in Washington with a multimedia exhibition at the National Gallery of Art.

The exhibit, entitled “Diaghilev and the Ballets Russes: When Art Danced with Music”, opens Sunday and will run until September.

It features more than 150 works, including paintings and sketches by artists who worked with Diaghilev, including Pablo Picasso and Jean Cocteau; Coco Chanel, who designed costumes  for the Ballet Russes’ “Le Train Bleu” performance; and Natalia Gonchorova, who produced elaborate set designs for the impresario.

Goncharova’s backdrop for “The Firebird”, which was written by Stravinsky and performed by the Ballets Russes in 1926, is the largest object ever exhibited at the National Gallery. Measuring 51.5 feet wide by 33.5 feet tall (15.7 x 10.2 meters), the gigantic tapestry has pride of place in one of the rooms of the exhibit, which takes up two floors in the National Gallery.

There are photographs by Man Ray of Stravinsky, a pencil sketch by Cocteau, and plaster bust of mythical dancer Vaslav Nijinsky, whose choreography for the 1913 debut of “The Rite of Spring,” for which Stravinsky composed the music, sparked a riot at the Theatre des Champs Elysees. Videos of Ballets Russes productions, including “Les Sylphides” play constantly throughout the exhibition.

Diaghilev’s collaborations with some of the biggest names in the world of art, music and dance “revolutionized the art of ballet,” said Earl Powell III, the director of the National Gallery of Art.

The exhibit is cosponsored by the Russian and American oil giants Rosneft and ExxonMobil, whose chief executives see their joint cultural venture as a way of broadening cooperation between the two countries.

"The exhibition serves to foster better understanding between the American and Russian people," said ExxonMobil chairman Rex Tillerson, adding his hopes that “Diaghilev and the Ballets Russes” would promote  “dialogue, interaction, and commerce between our two countries."

Rosneft president Igor Sechin called the exhibition “a momentous event” that means that Americans and Russians are “discovering not only new oil fields in the interest of future energy security, but also new depths of our cultural heritage in the interest of mutual understanding and respect."

Diaghilev was born near Novgorod in 1872, and spent most of his youth in Perm, the son of landed nobility who made their living through a vodka monopoly, until the family business went bankrupt in 1890.

That same year, with money he inherited from his mother, Diaghilev moved to St. Petersburg to study law but soon became involved in the rich art scene in the city, where he mingled with old friend Pyotr Tchaikovsky, as well as Alexandre Benois and Leon Bakst.

A year later, Diaghilev organized an exhibition of two centuries of Russian painting at the Salon d’Automne in Paris. A series of Russian concerts at the Paris Opera followed, and soon after, Diaghilev created the Ballets Russes, a venture that would bring him fame and fully occupy him until his death in Venice from complications from diabetes in 1929.

Eighty of the pieces featured in the exhibition are on loan from the Victoria and Albert Museum in London. The Dansmuseet in Sweden, the National Gallery of Australia and private collectors also loaned pieces from their collections to the US gallery for the exhibit.

The National Gallery of Art is also reaching beyond the exhibit itself to promote cultural cross-pollination between the United States and Russia.

Several ballet companies, including the Kirov Academy and the Washington Ballet, will tip their hats to Diaghilev with performances on the mezzanine of the National Gallery of Art in June, and visitors to the gallery will be able to take in movies and lectures about Diaghilev, classic dance or the Ballets Russes throughout the summer.