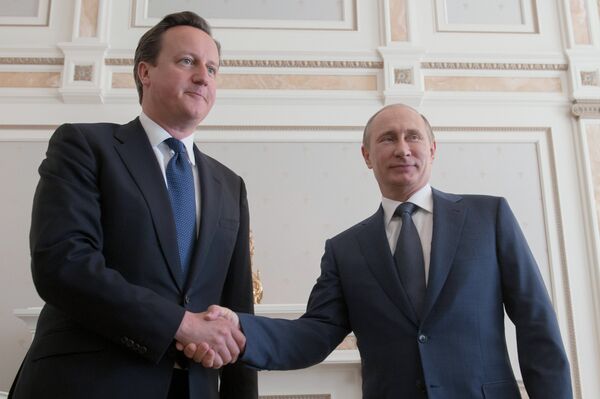 The UK premier arrived in Russia’s Black Sea resort city of Sochi on Friday to discuss a wide range of issues, although it is expected that Syria, which has been one particular area of policy divergence between the two countries, is likely to top the agenda.

Putin said at talks, which were initiated by Cameron, the sides discussed the options for a positive development of a situation in Syria and also “a number of joint steps” to settle the ongoing crisis.

The Russian leader said Moscow and London have “common interest in a speedy end to the violence, the launch of a peace process and the preservation of Syria’s territorial integrity and sovereignty.”

At a press conference in Sochi, Cameron said although Russia and the United Kingdom have different stances on Syria, they share a fundamental goal of “ending the conflict” and giving Syria’s people a right to elect a government and prevent the rise of extremism.

Cameron has supported the idea of convening international talks on Syria that will include international mediators and both representatives of the Syrian government and opposition.

The conference, expected to be arranged by the end of this month, will be aimed at facilitating a solution to the Syrian crisis through political dialog, US Secretary of State John Kerry said at a meeting with Russian Foreign Minister Sergei Lavrov in Moscow this week.

The UK premier said the United Kingdom, Russia and the United States should assist the formation of a transitional government of Syria based on the consent of the Syrian people.