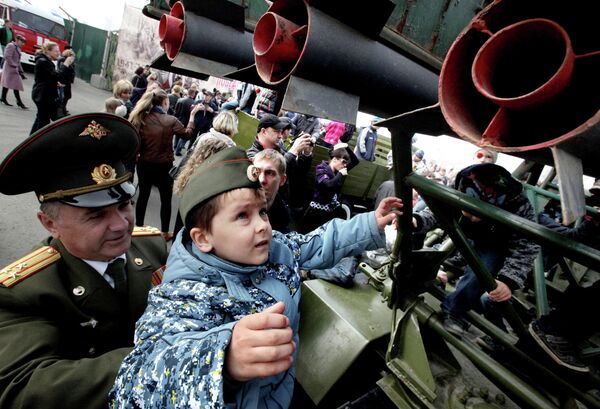 MOSCOW, May 9 (RIA Novosti) - More than 8.5 million of Russians attended Victory Day celebrations in over 5,000 cities and towns across Russia on Thursday, the Russian Interior Ministry said.

More than 164,000 police, along with some 10,000 servicemen, 9,000 volunteers, 4,700 cossacks and almost 12,000 employees of private security firms, were deployed to maintain security during festivities to mark the 68th anniversary of the victory over Nazi Germany in World War II.

No major violations of public order were reported, the interior ministry said. Though an unknown number of people were taken to police stations for minor violations, all of them were released by the end of the day.

The celebrations in Moscow began with a military parade at 10.00 a.m. local time (6.00 a.m. GMT). Over 11,000 servicemen and about 100 military vehicles took part. A total of 68 combat aircraft flew over Red Square, including Su-27 and MiG-29 fighters from the famous Russian Knights and Strizhi aerobatics teams.

Military parades were also held in 24 other Russian cities.

Celebrations in the Russian capital culminated with a massive fireworks display at 10 p.m. (18:00 GMT) in Moscow, with about 9,000 firework projectiles of 43 different types fired from 14 locations all around Moscow. The display lasted about 15 minutes and was visible from all parts of the city.