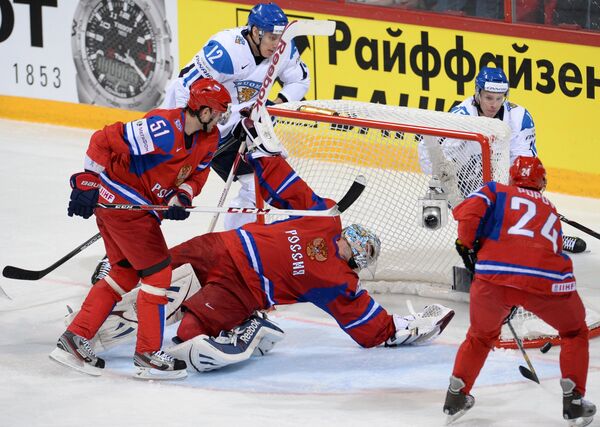 Russia’s woes at the world hockey championship continued Friday as host Finland held off a furious third-period charge for a 3-2 victory.

HELSINKI, May 10 (R-Sport) – Russia’s woes at the world hockey championship continued Friday as host Finland held off a furious third-period charge for a 3-2 victory.

Russia battered Finnish goalie Antti Raanta with 21 shots in the final frame and Ilya Kovalchuk scored with less than two minutes left, but the 23-year-old netminder ultimately held on, sending the raucous Hartwall Arena into a frenzy.

Raanta, who entered the game with a sparkling 1.53 goals against average, finished with 34 saves.

Petri Kontiola scored two goals for Finland, bringing his tournament total to five, second-most behind Kovalchuk. His tip off a Sami Lepisto point shot at 7:21 of the second period gave Finland a 2-1 lead as they pass Russia and the United States for first place in the Helsinki pool with 11 points.

The Russians, who saw their 13-game unbeaten streak at the world championship come to end Thursday after a shocking 2-1 loss to France, are now tied for second in the pool with nine points. Their record drops to 3-2 with the loss.

Juhamatti Aaltonen netted Finland’s decisive third goal – his third of the tournament – on a power play 16 minutes into the second period after Yevgeni Biryukov was penalized for hooking.

After taking 29 shots against the French, Russia fired 36 on Friday but had few clear looks. Only eight shots came in the second period, despite Finland racking up 10 penalty minutes. Alexander Radulov scored Russia's first goal on a power play three minutes into the second period.

Semyon Varlamov, who plays for the Colorado Avalanche, got his second start of the tournament and finished with 21 saves.

Kovalchuk and Finland’s Janne Pesonen each received 20-minute game misconducts with less than three seconds remaining in the third after tussling in front of the net during Russia’s final push.

Russia has a day off Saturday and will look to regroup ahead of Sunday’s game against Slovakia. The Finns take on Austria on Saturday.