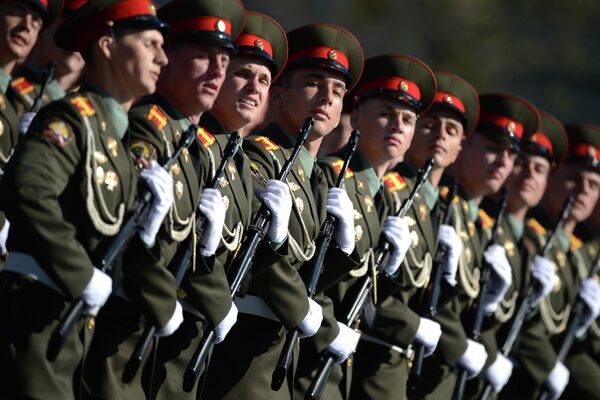 © RIA Novosti . Vladimir Astapkovich
/
Go to the mediabank
Subscribe
International
India
Africa
A record number of wreaths were laid at the Soviet War Memorial in London on Wednesday during a commemoration of the Soviet and British soldiers who served in the Second World War.

LONDON, May 9 (By Howard Amos for RIA Novosti) - A record number of wreaths were laid at the Soviet War Memorial in London on Wednesday during a commemoration of the Soviet and British soldiers who served in the Second World War.

The gathering, attended by over 300 people, included the Russian Ambassador Alexander Yakovenko, representatives from the Embassies of 11 former Soviet republics, local politicians and veterans from both sides.

Over 50 wreaths were laid during the event, which takes place annually, in the grounds outside London’s Imperial War Museum.

“It’s a big honor to take part,” said Vladimir Soldatov, 84, who served on a torpedo boat in the Northern Fleet in 1944 and 1945. On the invitation of the British Embassy he had flown from Moscow to be present.

“There was particular mutual respect on torpedo boats [because] the lives of everyone depended on each of us,” said Soldatov.

The political relationship between London and Moscow has been under severe strain for a number of years, and co-operation during the Second World War was held up as an example to be emulated by attendees.

“Victory has never been a source of contention between our two countries,” said Russian Ambassador Yakovenko and added that British Prime Minister David Cameron and President Vladimir Putin will meet Friday in Sochi.

Such a face-to-face meeting is a rare occurrence, and is expected to focus on differences over the ongoing civil war in Syria.

“If we are to avoid mass bloodshed and war, we have to learn to spend less on arms and defense and soldiers and bombs and nuclear weapons and more on conflict prevention,” said Simon Hughes, a senior member of Britain’s Liberal Democrat Party and a supporter of the Soviet War Memorial, which was unveiled in 1999.

The most famous military links between Britain and the Soviet Union in the Second World War were the Arctic convoys delivering supplies to the northern Russian ports of Murmansk and Arkhangelsk.

Ken Burkenshaw was 16 when he joined the British Royal Navy and subsequently made nine trips to Russia on the cruiser HMS Sheffield, which was part of the escort force for Arctic convoys.

Temperatures could get as low as -40 degrees, he said. “You will never forget that sort of thing… If you didn’t wrap up you didn’t survive.”

There were a total of 78 Arctic convoys between 1941 and 1945, departing from North America and Iceland, as well as Britain. Over 100 ships were sunk by Nazi aircraft and submarines, and thousands of sailors lost their lives. 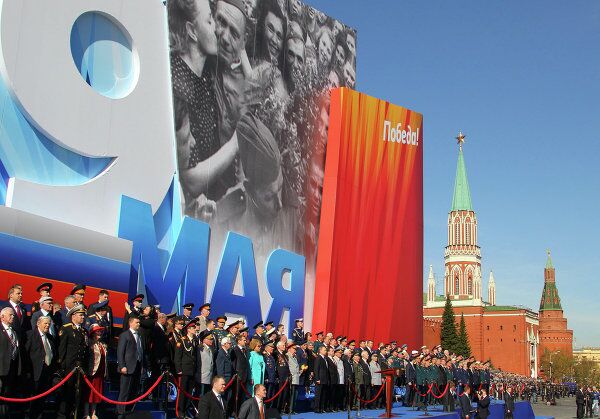 But it was not all ice, death and inhospitable seas.

“Our service was the best years of our youth,” said Soldatov, whose Soviet torpedo boat would meet the incoming convoys near the Medvezhi Islands in the Kara Sea.

Burkenshaw said he was never allowed ashore in Murmansk, but he would not forget the muscled Russian stevedores who assisted in re-stocking his ship.

“All the dockyard workers there were women,” he said, indicating the size of their arms with his hands. “I wouldn’t have liked to fall out with one of them!”

The annual remembrance services are organized by the Soviet Memorial Trust Fund, a body that was set-up to raise funds in Britain and Russia for a memorial to the Soviet victims of the Second World War.

Charles Downs, who was attending the event for the first time, served as a deck boy on a Polish ship in Britain’s Merchant Navy during the Second World War and made two trips to Russia.

One medal on his chest stood out because of its shininess: the Arctic Star, awarded earlier this year by the U.K. government to all those who served on the Arctic convoys.

“I applied for it and they sent it through the post,” he said.

Downs returned to Murmansk and Arkhangelsk last year on a holiday cruise and can speak a few words of Russian.

But during his time first time traveling through the Arctic as a 16 year-old boy, his ship was carrying a cargo of food, airplanes in crates and electrical generators.

“We had very heavy escorts and were very well protected,” he said.

“But we were bombed going out… about 40 torpedo aircraft attacked us and two of the ships were lost.”