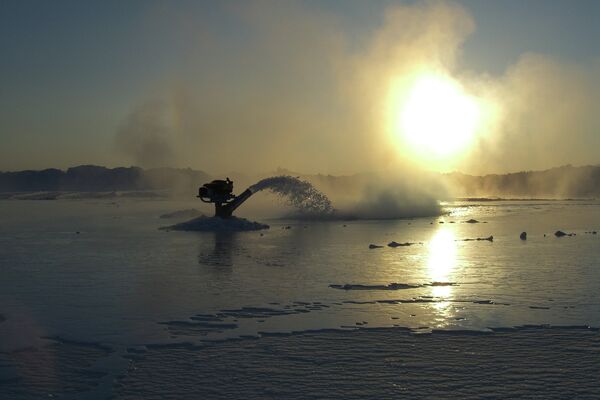 © Photo : Courtesy, Julie Brigham-Grette, University of Massachusetts-Amherst
Subscribe
A team of scientists from the United States, Russia and Germany who drilled into the bottom of a Siberian lake, found that the Arctic was not covered in a sheet of ice 3.6 million years ago as it is today, but was warm and forested, a study published Thursday says.

WASHINGTON, May 9 (by Karin Zeitvogel for RIA Novosti) – A team of scientists from the United States, Russia and Germany who drilled into the bottom of a Siberian lake, found that the Arctic was not covered in a sheet of ice 3.6 million years ago as it is today, but was warm and forested, a study published Thursday says.

Evidence in the sediment gathered by scientists who drilled more than 348-yards (318 meters) into Lake El’gygytgyn, in the region of Chukotka in northeastern Siberia, shows that “3.6 million years ago, the Arctic was a very different place,” Julie Brigham-Grette of the University of Massachusetts Amherst, the lead US scientist on the study, told RIA Novosti.

The project “provides the first continuous record of climate change in the Arctic,” Brigham-Grette said.

She worked on what she called a “fabulous international collaboration” with Pavel Minyuk of Russia's Northeast Interdisciplinary Scientific Research Institute in Magadan and Martin Melles of the University of Cologne in Germany, as chief scientists.

The study began with preliminary research and fundraising in 1994. In the spring of 2009, the team of researchers drilled through the ice on the surface and into the bottom of Lake El’gygytgyn, which lies around 62 miles (100 kilometers) north of the Arctic Circle. The lake, which Brigham-Grette refers to as Lake E, was formed 3.6 million years ago when a meteor smashed into the northeastern reaches of Siberia.

The sediment retrieved during the drilling operation provided the scientists with a snapshot of the “complete 3.6 million year record” of the lake, chronicled in pollen and other climate imprints, or proxies, trapped in the sediment core. Scientists use the proxies to “see” what the climate in the region was like millions of years ago and try to model what the Arctic climate might become in future. 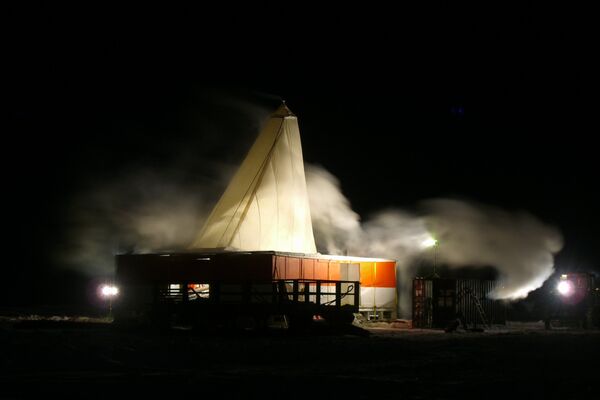 The ice platform used to drill to the bottom of the ancient lake in Russia’s Arctic.
© Photo : Courtesy, Julie Brigham-Grette, University of Massachusetts-Amherst

Analysis of Lake E’s sediment core showed that “the area of Chukotka was quite warm” and the Arctic was probably ice-free when the lake, which is the oldest and largest in the Arctic region, was formed.

“It was almost eight degrees Celsius warmer in summer than it is now,” 3.6 million years ago, Brigham-Grette said.

The average summer temperature in Chukotka, 3.6 million years ago, was around 3 degrees Celsius (37 degrees Fahrenheit), the study, published in the journal “Science,” said.

“At the time of the El’gygytgyn impact 3.6 million years ago… forests reached the Arctic Ocean coast… and permafrost was not widespread,” said the study – very unlike the extreme conditions in the Arctic today, even though greenhouse gases in the atmosphere are at similar levels to when Lake E was formed.

“We’re learning a lot of new things from it about how sensitive the earth’s system, and particularly the Arctic, is to really small changes in carbon dioxide and other parameters,” Brigham-Grette said. 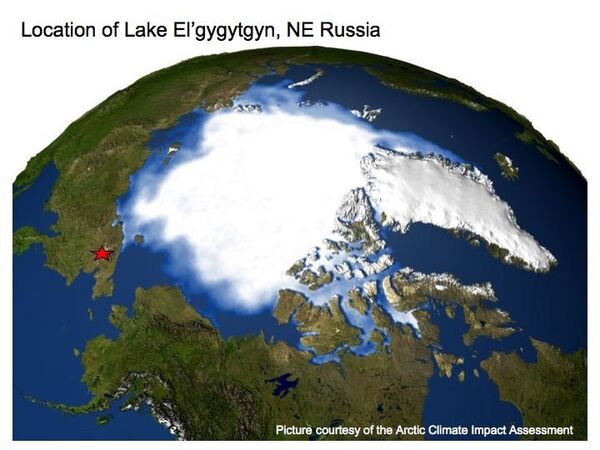 “What’s happening today with our increasing CO2 is that global temperatures are rising and, some people would argue, we’re heading to a situation like what was going on in the Pliocene – we see tree lines marching further north, permafrost starting to decay, the Greenland ice sheet starting to melt away quickly, sea surface temperatures rising,” she said.

Just as Earth took a while to cool down after the end of the Pliocene era, “one of the implications of the study is that Earth today is trying to catch up to the level of warming that we’ve put into the atmosphere.

“So there’s a lag between how fast the earth’s system can respond and the extremely rapid way humans are increasing CO2,” Brigham-Grette said, warning that the Arctic could once again become ice-free if greenhouse gases continue to be pumped into the atmosphere.