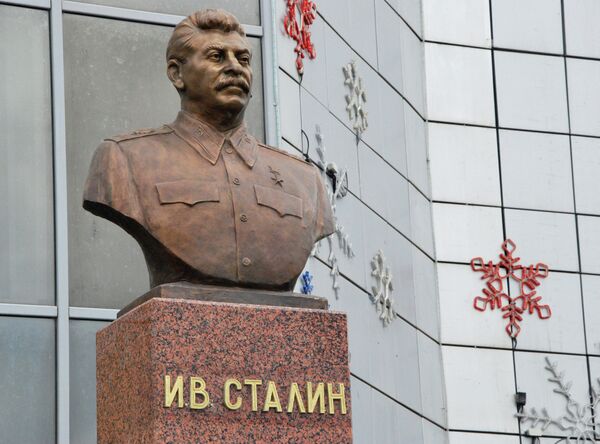 © RIA Novosti . Bolot Bochkarev
/
Go to the photo bank
Subscribe
A bust of Soviet leader Josef Stalin, one of the 20th century’s most brutal dictators, was unveiled in the northeast Siberian city of Yakutsk on Wednesday, a Communist Party official said.

BLAGOVESHCHENSK, May 8 (RIA Novosti) – A bust of Soviet leader Josef Stalin, one of the 20th century’s most brutal dictators, was unveiled in the northeast Siberian city of Yakutsk on Wednesday, a Communist Party official said.

The 2.5-meter bronze bust was unveiled on the territory of the Almazi Anabara private diamond company on the eve of nationwide celebrations to mark the capitulation of Nazi Germany in Europe in 1945.

A company spokesman was not available for comment as of Wednesday afternoon.

The company offered to host the bust after local communists were denied permission to erect it on a square in the city.

Stalin, whose gulag prison camps and secret police took the lives of millions of Soviet citizens during his almost 30-year reign, remains a popular figure with many Russians.

Critics have accused President Vladimir Putin of attempting to bolster Stalin’s reputation. School history books that describe Stalin as an “effective manager” have been released in recent years and the city of Volgograd is temporarily renamed Stalingrad, its World War II-era name, for several days a year to mark celebrations linked to crucial events in the war.

A survey by state pollster VTsIOM last year indicated that 33 percent of Russians viewed Stalin positively, while 25 percent disapproved of him. The poll surveyed 1,600 respondents.

Historians estimate the total number of victims of Stalin-era political repressions at anywhere between 3 million and 39 million.

According to historians, tens of thousands, at the very minimum, of gulag camp inmates perished while being forced to build the “Road of Bones” that connects the port of Magadan to Yakutsk. Their bodies were laid under or around the road, which was constructed on permafrost.