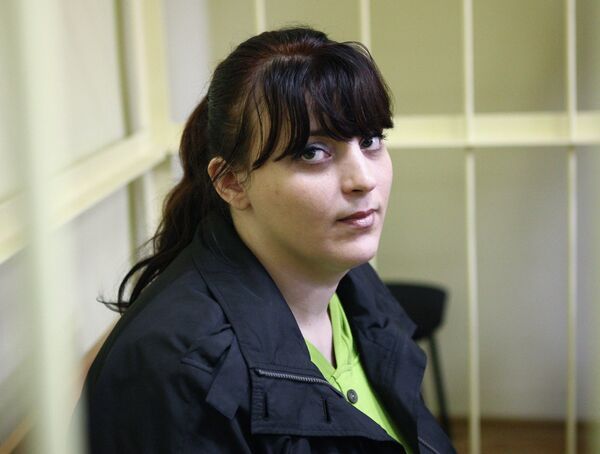 © RIA Novosti
Subscribe
Lawyers for a Russian political activist’s wife, whose eight-year prison sentence was slammed last year by then-President Dmitry Medvedev as “harsh,” have filed a complaint with the European Court of Human Rights.

MOSCOW, May 7 (RIA Novosti) – Lawyers for a Russian political activist’s wife, whose eight-year prison sentence was slammed last year by then-President Dmitry Medvedev as “harsh,” have filed a complaint with the European Court of Human Rights.

Taisiya Osipova, 28, was arrested in 2010 and sentenced in late 2011 to 10 years in jail after police found four grams of heroin at her home in the west Russian city of Smolensk.

Osipova, a former opposition activist, said the drugs were planted by officers after she refused to provide them with information on her husband, Sergei Fomchenkov, a leading member of the unregistered Other Russia opposition party led by veteran political firebrand and writer Eduard Limonov.

The sentence was overturned on appeal in February 2012 after Medvedev criticized it and called for a new probe. The court, however, refused to free Osipova – a diabetic with a young daughter – on bail.

At her new trial in August 2012, state prosecutors asked the judge to jail Osipova for four years, but she was sentenced instead to eight. Lawyers for Osipova said they had never heard of a Russian court handing down a sentence twice that requested by the prosecution, and said the verdict was clearly “politically motivated.”

Veteran human rights activist Lev Ponomaryov said at the time that the verdict proved Russia’s courts were “cruel” and “unjust.”

Osipova’s lawyer, Irina Khurnova, who has also represented Pussy Riot in court, said she was quietly confident the Strasbourg court would find in her client’s favor.

“There is every chance that our complaint will be satisfied,” she told the Rapsi legal news agency.