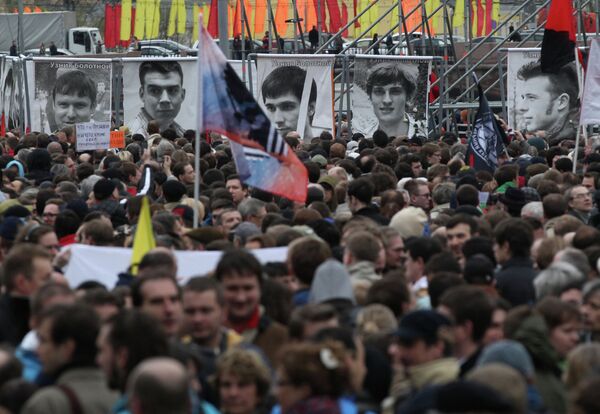 Thousands of opposition activists rallied in Moscow on Monday to mark the first anniversary of a protest march that erupted into violence and triggered a radical tightening of political screws by the Kremlin.

MOSCOW, May 6 (RIA Novosti) – Thousands of opposition activists rallied in Moscow on Monday to mark the first anniversary of a protest march that erupted into violence and triggered a radical tightening of political screws by the Kremlin.

The 2013 rally ended without any major conflicts, with protesters peacefully gathering on the downtown Bolotnaya Square where a crowd clashed with police a year ago on the eve of President Vladimir Putin’s inauguration.

Police said 8,000 showed up Monday, the same figure they gave last year, while opposition activists and the media cited figures ranging from 10,000 to 50,000 for Monday’s rally, with 30,000 appearing to be the consensus figure supported by a RIA Novosti correspondent present at the scene. Last year, the organizers gave figures ranging from 50,000 to 100,000.

“I thought there would be more of us here,” said Dmitry Yarlamov, a student. “Lots of people are afraid, I guess.”

“The shining lights of the nation are gathered here today,” ex-lawmaker Gennady Gudkov, a major figure in the ongoing anti-Kremlin movement, told the protesters from the stage.

The event was in danger of cancelation earlier Monday when a falling loudspeaker killed a volunteer installing the sound equipment on Bolotnaya Square.

But the authorities gave the event the green light to go ahead, though the stage was closed off by investigators, leaving the speakers to deliver their anti-Kremlin diatribes from a truck.

The mood was considerably darker than at most of the opposition rallies held in Moscow over the past 18 months. Ironic placards satirizing the Kremlin appeared to take a backseat to flags of political groups and banners reading “Free political prisoners,” “You’ll pay” or simply “Goats” (an insult in Russian).

The mood was also defiant. “I often used to think about leaving Russia because of the corruption, the thieves in the Kremlin,” said lawyer Marina Veinzof. “But now I am determined to stay and make the country a place I would like my children to grow up in. And we will win!”

“I am fighting for a new future for my family," opposition leader Alexei Navalny told the crowd from the truck. “I have no other country, no other people. Congratulations on the [upcoming public holiday] Victory Day; we will win, just like our forefathers!” 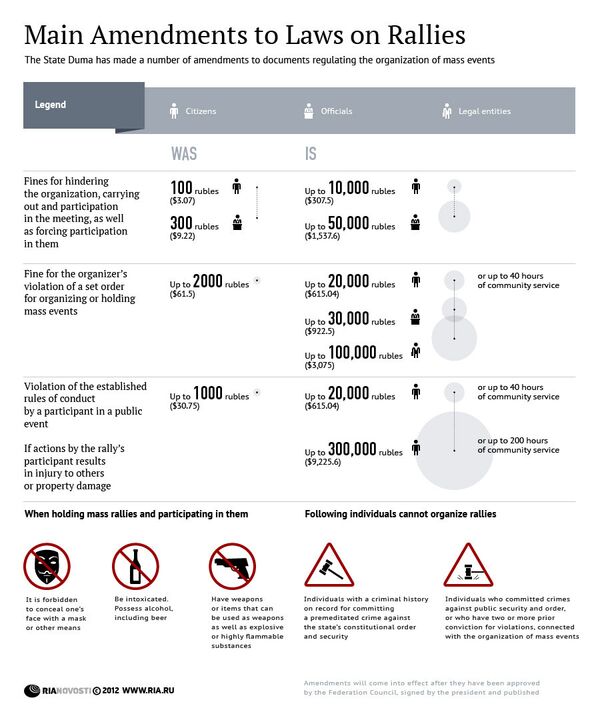 Seven people were briefly detained at the rally, six of them for wearing masks, which are banned at public gatherings, and the seventh for lighting a flare, city police said.

Moscow saw a string of mass opposition rallies in late 2011 and early 2012, sparked by parliamentary and presidential elections that were blighted by widespread allegations of electoral fraud.

Most protest events were peaceful, but about 650 people were briefly detained last May after protesters’ columns clashed with police cordons in a bottleneck at the square’s entrance.

The Investigative Committee has since opened a case into what it describes as mass riots, implicating, among others, a teenage girl, a pensioner and a half-blind leftist activist.

Opposition leaders claim that the violence in 2012 was instigated by provocateurs among protesters together with the police, and accuse the Kremlin of mounting a large-scale clampdown on dissenters after the Bolotnaya Square clashes, including by tightening regulations on public gatherings and independent NGOs, opening cases against Navalny and fellow opposition leader Sergei Udaltsov, and introducing elements of Internet censorship. The Kremlin has dismissed the allegations.

A protest rally also took place in St. Petersburg on Monday. Police put turnout at 750, compared to the organizers’ figure of 1,000.