Protesters March in Moscow on Eve of Anti-Putin Rally 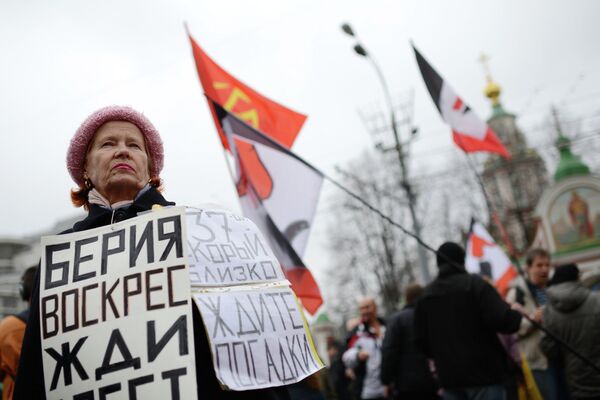 © RIA Novosti . Ramil Sitdikov
/
Go to the photo bank
Subscribe
Several hundred protesters marched through central Moscow on Sunday to call for the release of people arrested after last year’s clashes at a rally against the rule of President Vladimir Putin.

MOSCOW, May 5 (RIA Novosti) - Several hundred protesters marched through central Moscow on Sunday to call for the release of people arrested after last year’s clashes at a rally against the rule of President Vladimir Putin.

The demonstration came on the eve of what is expected to be a much bigger anti-Putin rally in Moscow on Monday evening, the first this year to be organized by established protest leaders such as Alexei Navalny, who is facing jail time over embezzlement charges he says are politically motivated.

Police said some 400 people had attended the rally. A RIA Novosti correspondent at the scene said up to 1,000 people were in attendance. Organizers have not yet announced an estimate of crowd numbers. There were no arrests reported.

One of the organizers of the rally, Mikhail Anshakov, told RIA Novosti last week the demonstration was designed to allow “working people” the chance to show their support for the almost 30 people detained in the year since the May 6, 2012 protest.

Anti-Putin figures say the clashes between police and protesters at last year’s rally were provoked by the authorities to allow them to clamp down on dissent.

The Kremlin’s human rights council has also said the police initiated the violence.

A number of opposition supporters had alleged Sunday’s rally was a “spoiler” for Monday’s event.

Leftist activist Konstantin Lebedev was jailed last month for 2.5 years after admitting to having organized the May 6 "mass unrest" with Left Front head Sergei Udaltsov, Left Front activist Leonid Razvozzhayev and Georgian politician Givi Targamadze. Investigators say Targamadze funded the unrest as part of a plot to topple Putin. Udaltsov has been under house arrest since February and Razvozzhayev has been in custody since October. Georgia says it will not extradite Targamadze.

All three men deny the charges, which could see them jailed for up to ten years each, if found guilty.