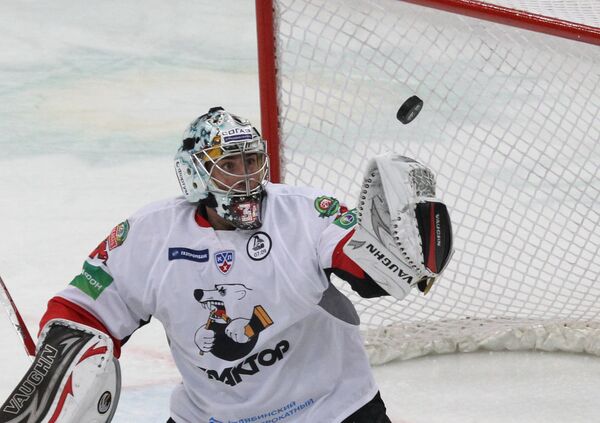 © RIA Novosti . Vladimir Fedorenko
/
Go to the photo bank
Subscribe
After back-to-back KHL all-star appearances, a standout performance in this year’s playoffs and the league’s all-time record for wins by a goaltender, Michael Garnett of Traktor Chelyabinsk has established himself as one of the most respected goalies in Russia.

MOSCOW, May 4 (R-Sport) - After back-to-back KHL all-star appearances, a standout performance in this year’s playoffs and the league’s all-time record for wins by a goaltender, Michael Garnett of Traktor Chelyabinsk has established himself as one of the most respected goalies in Russia.

But it was a slow climb for the 30-year-old Saskatoon native, who was drafted in 2001 by the Atlanta Thrashers and played only 24 games in the NHL before leaving North America in 2007. He bounced around from Neftekhimik Nizhnekamsk of the defunct Russian Superleague to HC MVD, to Dynamo Moscow and finally Traktor before the 2011-2012 season.

And now, the 15-year pro hockey veteran is fulfilling a dream, suiting up for Team Canada at the world hockey championship in Stockholm. He’ll likely serve as the team’s third goalie, behind Devan Dubnyk and Mike Smith, as Canada opens the tournament Saturday against Denmark.

R-Sport caught up with the goalie last month to talk about how his game has developed over the years and some of the challenges of playing in the KHL.

- Your 101 wins are the most for a goaltender in KHL history. How has your game changed since you moved to Russia seven years ago?

"I think with the experience and lots of ice time, I’ve just become a better player. The more practice you get and the more ice time I’ve gotten, that’s the biggest difference for me. I have a lot more confidence now than when I was younger. There are subtle differences in my game that I’ve had to change, but the way I play now is so suited to playing Russia and on the big ice, I don’t really know what it would be like to play in North America."

- What are some of the adjustments you’ve made as a KHL goalie?

"[Players] have a lot more puck control. The puck is always on someone’s stick and they’re always carrying it into the zone. In the NHL, the puck’s always getting chipped into the zone and players are getting hit. It’s such a smaller ice surface there that they can’t see the net as much. So there are more deflections and more screens. In the KHL, there are more pretty passing plays. So for a goaltender, it’s a thinking game. You have to see all the passes that are there. That’s played into my strengths because I’m a thinker. I’m trying to read the game."

- Can you pinpoint a major difference between NHL players and KHL players?

"The guys in the KHL have a really high skill level. They do tricky things with their stick and they have more time to make plays. And I’ve just become better at reading those little nuances, like when a guy is faking a pass or faking a shot, and not biting on them. In the North American style, if there’s a 2-on-1, one guy is going to line up for a slap shot. It’s more a meat-and-potatoes kind of game."

- In an article published during the NHL lockout, The Globe and Mail, a Canadian newspaper, called the KHL a “sprawling mess of a league,” plagued by fan interest and a crummy in-game experience. How do you respond to that criticism, which isn’t exclusive to the Globe article?

"I really think they’re wrong. I feel they don’t need to be so harsh. The guys that play here love playing here. Otherwise, they wouldn’t be here. Almost every team has an arena built in the last five years. They’re not huge, but they’re nice. The day-to-day, hockey-wise, there’s no difference from the NHL. The glitz and glamor, we don’t have that as far as the hockey goes. It’s a more pure game. If you were to come to a game here, there are no ads – it’s not 'brought to you by' someone, it’s not a business-based league. It’s not a revenue-based league. The owners, they’re here to win and for the game. The fans, they’re coming for the game. That’s kind of refreshing, to be honest."

This interview has been edited for length and clarity.