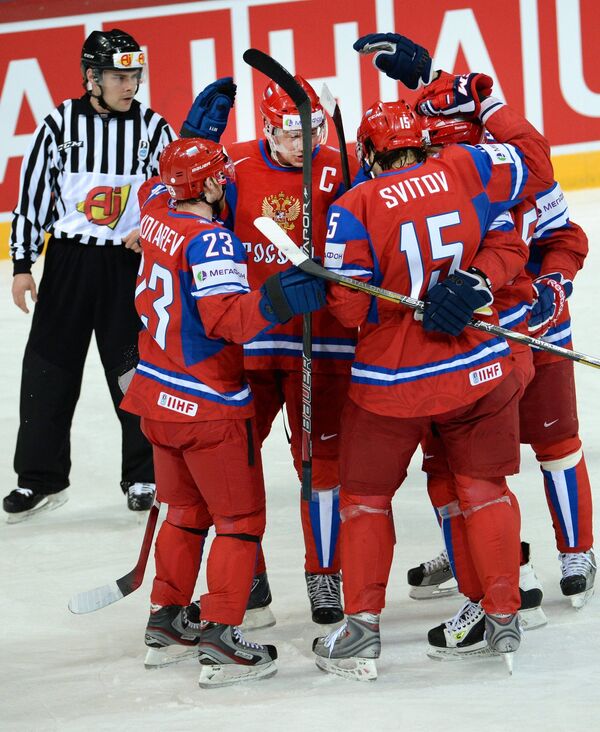 The win gives Russia their eighth-straight in world championship play dating back to last year, when they beat Slovakia for the gold medal. They’re scheduled to play Sunday against a German team that lost 4-3 to Finland on Friday, the first day of the 16-day tournament.

Against Latvia, Russia broke a scoreless game at 13:03 of the first period on a goal from Evgeny Biryukov. But they appeared sluggish in the first frame, managing just nine shots against Latvian goaltender Maris Jucers.

"Were we nervous in the beginning of the game? I think so," said Russian coach Zinetula Bilyaletdinov. "The first game is always psychologically complex. We are satisfied with the result ... but I believe that we still have work to do, and there are questions that need to be addressed."

The Russians woke up early in the second period after Armands Berzins laid a vicious check from behind on Sergei Soin, sending the 31-year-old center head first into the boards and forcing him to leave the game. Berzins received a 25-minute major for the hit.

Evgeny Medvedev, Alexander Radulov and Evgeny Ryasensky rattled off consecutive goals toward the end of the second period, spelling an end to Jucers’s day. Edgars Masalskis picked up where his predecessor left off, allowing an easy two-on-one goal to Ilya Kovalchuk just 17 seconds into the third period.

Kirill Petrov, a 23-year-old winger and former New York Islanders draft pick, iced the victory with a power-play goal off a rebound at 44:11 of the third.

Ilya Brzygalov, who recorded one shutout in a disappointing season with the Philadelphia Flyers, made 15 saves and faced only three shots in the second period.

"I had action in the first period, not much, and pretty much nothing in the second," the goalie told the IIHF. "In the third period they tried to get some goals and they came out hard, but it wasn't difficult."

The Latvians, who are coached by former NHL Coach of the Year Ted Nolan, next play the United States on Sunday. The Americans downed Austria 5-3 earlier Saturday.