Body Parts Discovered at US Plane Crash Site in Kyrgyzstan 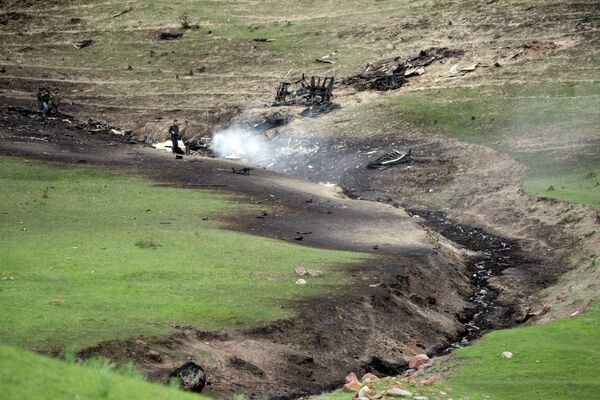 © RIA Novosti . Vladimir Pirogov
/
Go to the photo bank
Subscribe
Parts of the pilots’ bodies have been discovered at the site of Friday’s US military plane crash in northern Kyrgyzstan, the Kyrgyz Emergencies Ministry said on Saturday.

BISHKEK, May 4 (RIA Novosti) – Parts of the pilots’ bodies have been discovered at the site of Friday’s US military plane crash in northern Kyrgyzstan, the Kyrgyz Emergencies Ministry said on Saturday.

“Several parts of the pilots’ bodies have been found, and the search of the site continues,” a spokeswoman for the ministry’s press service said, citing Kalys Akhmatov, head of the country's rescue service training center.

Forty rescue workers are currently involved in the search. The black box recorders of the aircraft, whose remains are scattered over a four-kilometer area in Kyrgyzstan's Panfilov district about 10 kilometers from the border with Kazakhstan, have not yet been located and the cause of the crash remains unknown.

The Boeing KC-135 tanker aircraft had a crew of three Americans on board when it crashed into a mountain gorge on Friday shortly after taking off from the US base at Manas, Bishkek’s international airport.

The aircraft, which was reportedly carrying about 70 tons of fuel, was attached to the US Air Force base at Manas. The base has provided transit for American forces in Afghanistan since 2001, but is due to be shut down in 2014 because Kyrgyzstan refused to extend the lease.

A special government commission has been set up to investigate the cause of the crash and its consequences, a representative of the Kyrgyz Cabinet’s press service said.

“We have agreed with the American side that the government commission will investigate the catastrophe, which took place in the air space over the territory of the republic [of Kyrgyzstan],” said the chairman of the commission, Transport and Communications Minister Kalykbek Sultanov.

He said the preliminary results of the investigation could be received in the next three to four days.

On Friday, local residents cited by Kyrgyz and Russian media gave conflicting versions of the incident, with some saying the aircraft fell apart in the air and others claiming it blew up on impact.

An employee at Manas told RIA Novosti on Friday that the crew of the aircraft had reported bad weather and thunder in the area at the time and had asked for permission to fly around towering cumulus clouds en route.

The Kyrgyz government said its commission would also calculate the cost of the damage caused by the crash. Regional government officials have claimed that part of the tanker’s fuel has contaminated a mountain river flowing through the gorge where the plane crashed, and that the spilled fuel could have a negative impact on the ecology and well-being of locals, who use the water for their everyday needs and for their livestock.