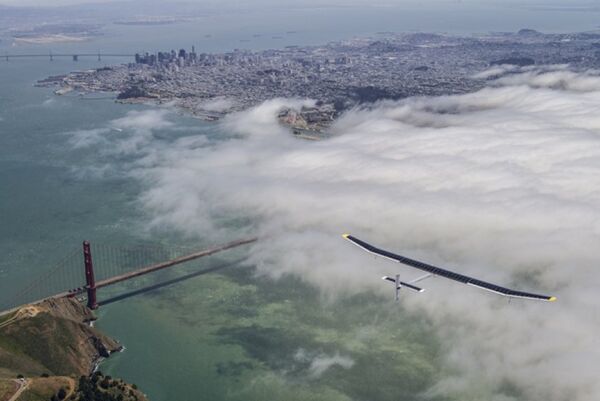 © Solar Impulse
Subscribe
The first airplane that can fly both day and night powered exclusively by the sun’s rays took off from California on Friday in the first stage of an attempt to fly across the United States without using any fuel.

WASHINGTON, May 3 (RIA Novosti) – The first airplane that can fly both day and night powered exclusively by the sun’s rays took off from California on Friday in the first stage of an attempt to fly across the United States without using any fuel.

The solar-powered plane, dubbed Solar Impulse, set off from San Francisco shortly after 6 a.m. (1300 GMT) local time and was expected to land in Phoenix, Arizona, 19 hours later for the aircraft’s first stop in the first-ever fuel-free transcontinental plane flight.

The Swiss developers behind the flight tout the project as a way to demonstrate the opportunities presented by clean technologies, with the ultimate goal of flying around the world in a second-generation version of the Solar Impulse HB-SIB aircraft currently under construction.

The plane has wingspan of 208 feet (63 meters) – equal to that of an Airbus A340 – but at 3,527 pounds (1,600 kilograms) weighs about the same as an average automobile, according to the developers. The power used to propel the aircraft is roughly equal to that used by US aviation pioneers Orville and Wilbur Wright in their first powered flight in 1903, they say.

With an average cruising speed of around 34 miles (55 kilometers) per hour , the plane is scheduled to make stops in Dallas and St. Louis before moving on to Washington in June and completing the mission by landing in New York City in June or July.

The aircraft is being manned by psychiatrist and balloon aviator Bertrand Piccard, a Swiss national who co-founded the project with his countryman, entrepreneur Andre Borschberg.

“You should see this like being in 1915 when the pioneers were trying to do these first cross-country flights – still unable to cross the ocean, but an important step for the development of aviation,” Borschberg said ahead of Friday’s flight, BBC News reported.

The cramped cockpit has room for only one person, is unheated and the pilot has to wear an oxygen mask because of a lack of pressurization.

A toilet is built into the lone cockpit seat, but the developers say the pilot should avoid eating fiber-rich foods one day prior to the flight so as to minimize the urgency of nature’s call during the long stretch in the air.

“It's more difficult and maybe less comfortable than flying through an airliner,” Borschberg told NPR in March.