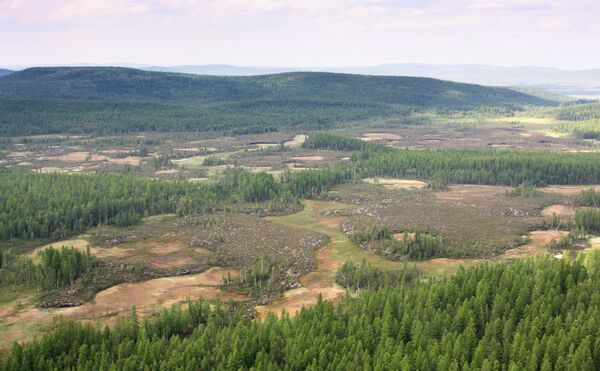 © RIA Novosti . Vitaly Bezrukih
/
Go to the photo bank
Subscribe
A Russian scientist has dismissed claims by Russian researcher Andrei Zlobin who said he discovered fragments of the largest celestial body to hit the Earth in recorded history.

MOSCOW, May 4 (RIA Novosti) - A Russian scientist has dismissed claims by Russian researcher Andrei Zlobin who said he discovered fragments of the largest celestial body to hit the Earth in recorded history.

Zlobin of the Vernadsky State Geological Museum at the Russian Academy of Sciences in central Siberia said in a preprint on Arxiv.org that three stones found by him may have been part of the so-called Tunguska meteorite that exploded over the area in 1908. Zlobin waited some 25 years before going public with the findings.

But Natalya Artemyeva of the Russian Academy of Sciences’ Geosphere Dynamics Institute told RIA Novosti: “Even if we assume the stones he found are really meteorites [which has not been proven yet], it’s necessary to prove they are fragments of the Tunguska.”

“There are many meteorites on Earth,” Artemyeva said. “For 100 plus years since the fall of the Tunguska space body, the weight of meteoric dust and small meteorites that have fallen out in that region has exceeded the mass of Tunguska.”

Though the Tunguska blast was 1,000 times more powerful than the nuclear bomb that destroyed Hiroshima in 1945, scientists have failed to find any fragments of the celestial body that caused it.

Artemyeva said she was surprised that Zlobin had not conducted geochemical analysis of the fragments.

“It’s ridiculous. You can’t say by the appearance of a stone that it’s a meteorite,” she said. “I don’t think there is ground for scientific discussion here.”

But Zlobin said in the preprint published earlier this week that he had found several alleged fragments of the Tunguska bolide during a 1988 expedition to the area where the event took place.

Three stone bodies found on the shoal of the Khushmo River near the impact’s site have traces of melting and regmaglypts, or indentations formed during the passing of a meteorite through the atmosphere, the preprint said.

The samples, which are still pending chemical analysis, were mothballed until 2008, Zlobin said, without elaborating on the reasons. Russian academia suffered a dramatic decline after the Soviet Union’s demise in 1991 due to lack of funding.