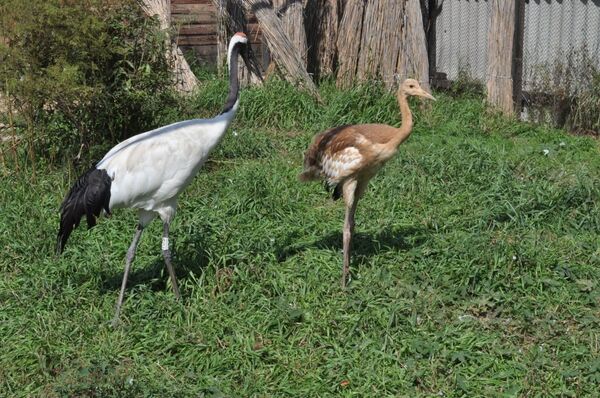 © Photo : Crane Land
Subscribe
International
India
Africa
An ecological support group in Russia running a protected site for cranes has been branded as a "foreign agent" by Russian prosecutors - the latest in a series of NGOs to be listed as such by the authorities.

MOSCOW, May 3 (RIA Novosti) - An ecological support group in Russia running a protected site for cranes has been branded as a "foreign agent" by Russian prosecutors - the latest in a series of NGOs to be listed as such by the authorities.

"Crane Homeland," set up in the far east Amur Region, runs a protected park for rare cranes and storks, and is run by volunteers, naturalists, and staff from Moscow State University's biology department, according to its website.

Russia passed a law last November requiring all NGOs engaged in political activity, and receiving finance from abroad, to register as a "foreign agent." That term has overtones of spying and indeed treason to many Russians.

The group says it is "outraged" that its members have been branded "foreign agents." Set up by Russian ornithologist Sergei Smirensky, it says it has no other activity than running a small reserve protecting rare birds from forest fires and poachers, and running ecological awareness groups for children.

The group says it cannot put up with the burden of being classed as a foreign agent, which incurs considerable extra supervision from government and time-consuming red-tape for disclosure of funding and reporting on activities. Crane Homeland says it gets some funding from the International Crane Foundation.

When the new NGO law was passed, the government insisted it was necessary to disclose foreign funding in order to stop external meddling in Russia's political affairs. NGOs maintained the law was likely to be misused to put unfair pressure on their activity, and would be used indiscriminately against groups not directly involved in politics.

In particular, they pointed out the lack of a clear definition of "political activity," which now appears to have included helping animals.

It was not possible to get comment from Amur Region prosecutors at the time of writing.

Russia's Golos Association, an independent election monitoring NGO, said last month it would probably have to close, after the organization was fined 300,000 rubles (around $10,000) for failing to register as a "foreign agent."

Golos was the first NGO to face administrative charges following the introduction of the new NGO law.

President Vladimir Putin said earlier this month that Russian NGOs received almost $1 billion in foreign funding in 2013, though the Kremlin has so far failed to name these groups when requested to do so by several prominent NGOs.