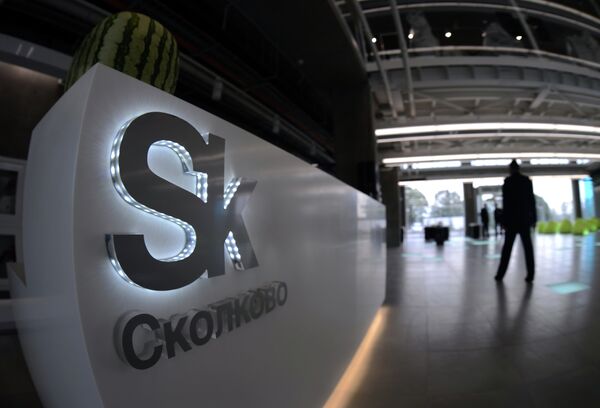 LONDON, May 2 (By Howard Amos for RIA Novosti) - Deputy prime minister and influential Kremlin ideologue Vladislav Surkov mounted a vigorous defense of the embattled Skolkovo innovation hub and of the Russian political system during a visit to London on Wednesday.

Though it has been implicated in a string of corruption scandals in recent months, Surkov said Skolkovo was one of Russia’s “cleanest projects.”
He also criticized law enforcement bodies for being over-zealous in their pursuit of alleged graft.

“The energy with which the Investigative Committee publishes its suppositions gives one the feeling that there has been a crime,” Surkov told a group of students and journalists at the London School of Economics.

“To speak so loudly about possible violations before the decision of a court is probably not correct… we have yet to see whether they will prove it or not.”

And criminal investigations were opened into two senior Skolkovo executives in February over the alleged embezzlement of $800,000. Subsequent law enforcement searches in the offices of the Skolkovo Foundation disrupted the schedules of top managers.

The establishment of Skolkovo, designed to mimic California’s Silicon Valley, was announced by then-President Dmitry Medvedev in 2009.

Surkov, who is considered one of the architects of Russia’s Kremlin-centric political system and whose public appearances are rare, was appointed by Medvedev as deputy prime minister in charge of modernization in 2011.

Surkov’s singled out Viktor Vekselberg, Skolkovo’s billionaire public face and president of the Skolkovo Foundation, as a key reason for his faith in Skolkovo.

Vekselberg, who has a fortune of about $15 billion amassed primarily from investments in metals and mining, is so wealthy that there is no incentive for him to allow corruption, according to Surkov.

“Vekselberg recently received several billion dollars for his share in [oil company] TNK-BP,” said Surkov, “It’s difficult for me to imagine that he would steal a few hundred million dollars… he doesn’t need it.”

In the context of Russian economic and political life as a whole, Surkov said that the development of an innovative economy, through ventures like Skolkovo, is essential for the country's survival.

“We have two types of big business. One is the export of raw materials and the second is the import of consumer goods. Big money is only made in these two areas… [but] we want to break this trend,” he said.

“If we don’t [move towards a post-industrial society] I am sure that Russia will not survive… it’s a choice [that will determine] our existence.”
A small group of protestors from the London-based Russian civil rights movement Speak Up! were gathered outside the entrance to the venue for Wednesday evening’s event. They were calling for Surkov to be included on the US Magnitsky list that bans Russians, mainly law enforcement officials, accused of human rights violations from entering the United States and keeping assets there.

Surkov, who helped to create the current political system during his eleven years in the presidential administration, dismissed the suggestion that Russia is entering a period of stagnation, or that it is vulnerable to pressure from opposition groups.

“I don’t see any stagnation,” he said. “Life in Russia is very tempestuous and very dynamic.”

The system's strength and its ability to adapt was proved by how it survived the street protests triggered by allegations of mass fraud in the 2011 parliamentary elections, said Surkov.

“There is an opinion that after the protests of December 2011 the old system collapsed,” he said. “No. It defeated the opposition and that is a fact.”
Shortly after the protests, the Kremlin and the ruling United Russia party introduced several laws, increasing punishment for public protests and tightening control over civic groups, while law enforcement agencies, citing different reasons, cracked down on opposition activists and rights groups.

Asked about the falling popularity of the United Russia party, Surkov said that the Kremlin could step in to create another powerful political party.
“I am certain it would be useful for Russia if there was a second big party that could seriously compete with United Russia,” he said.

“It is possible this party will even need help to be formed.”