‘Aliens’ Messed with US, Soviet Nukes – US Airmen 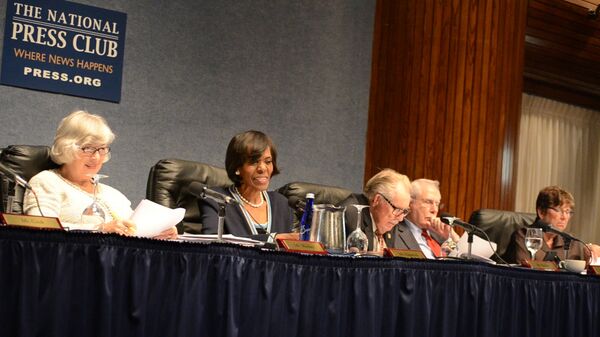 In the midst of the Cold War on several occasions, nuclear missiles at US Air Force bases were mysteriously shut down, according to US servicemen who said they witnessed the failure of the heavily guarded missile systems.

WASHINGTON, May 1 (RIA Novosti) – In the midst of the Cold War on several occasions, nuclear missiles at US Air Force bases were mysteriously shut down, according to US servicemen who said they witnessed the failure of the heavily guarded missile systems.

But they don’t blame America’s Cold War enemy, the Soviet Union; they say aliens from space did it.

“This was something Russia could have developed, but it turns out they didn’t develop this and we don’t have it either – to be able to shut down nuclear weapons with a beam of light,” David Scott, a former sergeant in the US Air Force, told RIA Novosti at a conference in Washington on encounters with extraterrestrials.

Scott and three retired Air Force officers told a panel of six former members of the US Congress at the conference about their experiences with extraterrestrial “visitors” who meddled with US nuclear weapons systems.

The five-day conference, called the Citizen Hearing on Disclosure, is sponsored by the UFO truth organization Paradigm Research Group and is being held in the style of Congressional hearings, with time limits for witness testimony, question and answer sessions with former members of Congress, and statements entered into the record.

About 40 international researchers, military and scientific witnesses are scheduled to testify during the conference, with some providing what they say is evidence of an alien presence on Earth. The former lawmakers listening to the testimony are each being paid $20,000 to attend the five days of hearings. 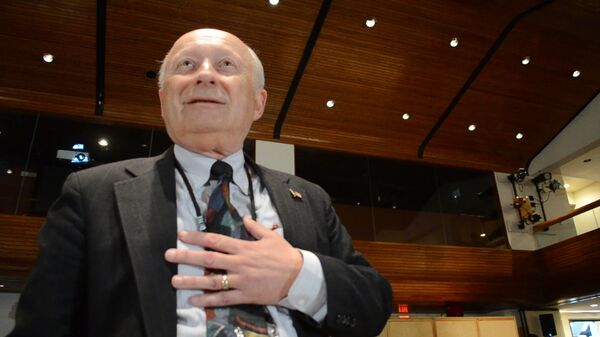 Former US Air Force Capt. David Schindele spoke out for the first time about his UFO experiences in the 1960s
© Karin Zeitvogel

Speaking for the first time ever about his experiences some 50 years ago with extra-terrestrials, retired Air Force Capt. David Schindele told how, in the 1960s, what he is convinced were aliens knocked “all missiles” at Minot Air Force Base in North Dakota “off-alert,” making them “unlaunchable.”

“We had no doubt that the 10 nuclear-tipped missiles had been compromised, tampered with and put out of commission by the ‘object’ that had paid a visit” the night before, an emotional Schindele told the panel of former lawmakers.

Retired Air Force Captain Robert Salas told of an incident at an air force base in Montana in 1967, where nuclear missiles “were shut down as a UFO was seen overhead.”

While aliens were allegedly shutting down nuclear weapons systems in the United States, in the Soviet Union, in 1982, they are suspected of initiating launch procedures for nuclear warheads, sending Soviet troops scrambling to undo the extraterrestrial move, witnesses told the former lawmakers.

US airmen, who claim they saw UFOs were forced to sign oaths of secrecy, forget they ever saw anything, and were ridiculed by their peers and superior officers when they reported UFO sightings, the witnesses told the panel.

Salas wrote a book in 2005, “Faded Giant,” about the Montana air force base UFO event, which spurred many of the other panelists to finally speak in public about their experiences with what they say were extraterrestrials.

In the Soviet Union, meanwhile, those who reported seeing UFOs were treated entirely differently, historian and UFO author Richard Dolan testified, citing a case in 1990, “which involved an unbelievable encounter by an object that was playing all sorts of games with the Soviet interceptor that was seen by multiple of witnesses.”

And like the US airmen, the Soviet top brass did not blame their Cold War rivals, the Americans, but pinned the blame for the incident on extraterrestrial visitors, Dolan added.

“The top Soviet commander said, ‘There is no way we were going to attack this. It was vastly beyond anything that we or anyone we know had,’” Dolan said, adding that Soviet military “discounted that this was American -- not a chance.”

One of the former lawmakers on the panel was overheard by RIA Novosti as saying the conference was a first step toward holding a real Congressional hearing on UFOs.

“It clearly warrants a congressional hearing but that would violate the ‘truth embargo,’ which is the name I’ve given to the policy of the government to withhold acknowledgement and information of an extraterrestrial presence,” said Bassett of the Paradigm Research Group.