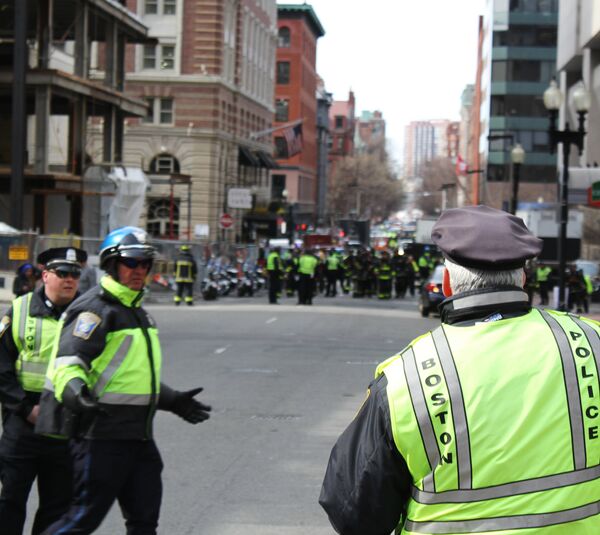 © RIA Novosti . Filipp Kravtsov
/
Go to the photo bank
Subscribe
A member of the US House Homeland Security Committee on Monday questioned why Russian authorities didn’t tell investigators in the United States about a 2011 wiretapped conversation between one of the Boston Marathon bombing suspects and his mother, claiming information gleaned from the phone call might have made a difference in the investigation long before the April 15 attack.

WASHINGTON, April 29 (RIA Novosti) – A member of the US House Homeland Security Committee on Monday questioned why Russian authorities didn’t tell investigators in the United States about a 2011 wiretapped conversation between one of the Boston Marathon bombing suspects and his mother, claiming information gleaned from the phone call might have made a difference in the investigation long before the April 15 attack.

Details about the phone conversation, “would have caused the FBI to go further, and again, get to the bottom of this a lot more quickly and possibly headed this entire disaster off,” he added.

US media reports indicate the Russian government secretly recorded the older of the two suspects, Tamerlan Tsarnaev, 26, who was killed during a shootout with police days after the bombing, talking with his mother about jihad during a 2011 phone conversation.

Russian authorities also recorded the mother talking with someone in Russian who is under investigation in a different case, according to The Associated Press.

Moscow told investigators in the US they had concerns about Tamerlan’s radical views and religious ideology in 2011, but reportedly didn’t share more specific information about the secretly recorded phone calls until after the Boston bombings.

The FBI said it investigated Tamerlan, did not find any terrorist activities and closed the case in June 2011.

Three people were killed in the twin blasts near the finish line of the marathon, and more than 250 others were injured. Tamerlan’s Tsarnaev’s younger brother, Dzhokhar Tsarnnaev, 19, who was injured during his capture, has been charged with using a weapon of mass destruction. He is being held at a prison medical facility in Massachusetts.

A spokesman for the Russian Embassy in Washington refused comment on King’s claims Monday, telling RIA Novosti to “look at the remarks of the Russian president. He has explained our position.”

Russian President Vladimir Putin told reporters last week that he wished the information from Russia had been more useful.

“The Tsarnaevs did not live in the Russian Federation, they came to Russia from Kyrgyzstan and only appeared here occasionally while residing in the United States,” said Putin. “The Russian special services, to my great regret, were not able to provide our American colleagues with information that would have operative significance.”

“I just call for this tragedy to be an incentive for us to become closer in tackling common threats, with terrorism being one of the most important and dangerous of them. If indeed we combine our efforts, we won’t take such hits and sustain such losses,” Putin said.

“There’s no doubt the Russians are cooperating more but… there’s still not full trust between the US and the Russians, and they don’t want to give us any information which is going to give away any of their sources, any of their methods, so it’s sort of a bit of a dance here,” he said.