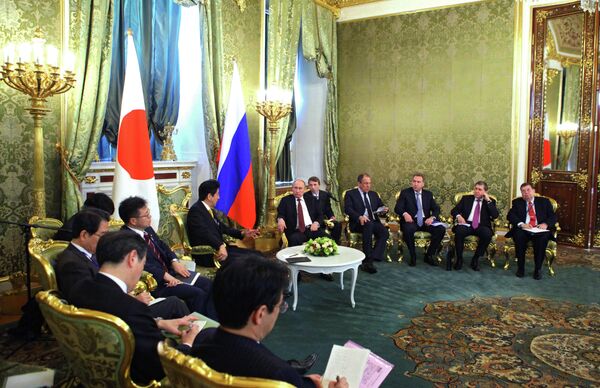 “Russia’s hydrocarbon reserves are so [enormous] that they are also capable of meeting Japan’s growing requirements without detriment to our traditional partners,” Putin told Abe, during the first visit by a Japanese premier to Russia in the last 10 years.

“This could be joint hydrocarbon production and joint construction of a liquefied natural gas plant," Putin said. "Gazprom is ready to invest its resources in new capacity for gas reception on the territory of Japan, invest in gas pipeline systems and we are ready to consider building additional electric power capacity in Russia for subsequent supply to Japan.”

Japan is currently struggling with energy shortages and has had to import more gas in order to compensate for the shutdown of a number of nuclear plants following the Fukushima nuclear disaster in March 2011.

Following the APEC summit in the fall of 2012, Putin lent support to a Russian-Japanese project to build a liquefied natural gas plant in Vladivostok to boost LNG supplies.

The Vladivostok plant will have a capacity of at least 10 million tons of LNG a year, according to Gazprom estimates. Output is scheduled to reach full capacity before the end of 2016, of which 70 percent will go to Japan and 30 percent to South Korea, Gazprom CEO Alexei Miller said previously.

A Japanese consortium of Itochu, Japex, Marubeni, Inpex and Cieco signed an agreement with Gazprom in April 2011 to prepare a joint feasibility study on construction of the LNG plant and other gas-chemical facilities in Vladivostok.