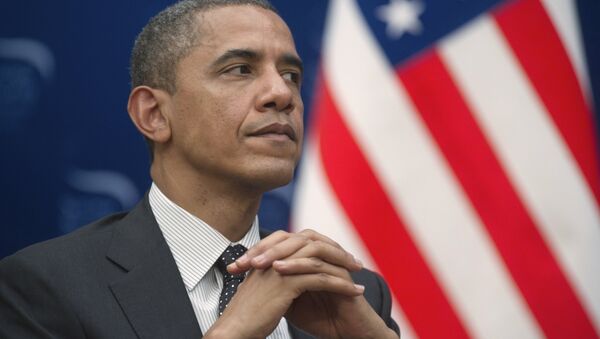 © Sputnik / Sergey Guneev
/
Go to the mediabank
Subscribe
International
India
Africa
US President Barack Obama told Russian President Vladimir Putin in a telephone call Monday that he appreciates Russia’s assistance in the investigation of the deadly Boston Marathon attack earlier this month, the White House said in a statement.

WASHINGTON, April 29 (RIA Novosti) – US President Barack Obama told Russian President Vladimir Putin in a telephone call Monday that he appreciates Russia’s assistance in the investigation of the deadly Boston Marathon attack earlier this month, the White House said in a statement.

During the call, Obama reiterated “his appreciation for the close cooperation that the United States has received from Russia” concerning the attack, in which two men with ties to Russia’s restive North Caucasus region are suspected of detonating two bombs that killed three people and wounded more than 250 near the finish line of the race, the White House said.

The call came amid US media reports indicating the Russian government secretly recorded the older of the two suspects, Tamerlan Tsarnaev, 26, who was killed during a shootout with police days after the bombing, talking with his mother about jihad during a 2011 phone conversation.

Moscow told investigators in the US they had concerns about Tamerlan’s radical views and religious ideology in 2011, but reportedly did not share more specific information about the secretly recorded phone calls until after the Boston bombings.

White House spokesman Jay Carney told a news conference Monday that he did not “have any confirmation” about information Russia may have provided about the Tsarnaevs prior to the attack.

“We have a cooperative relationship with our Russian counterparts when it comes to counterterrorism,” Carney said.

Obama and Putin also discussed “cooperation on counterterrorism and security issues going forward, including with respect to the 2014 Winter Olympics in Sochi,” the White House statement said.

The White House said in a letter to lawmakers last week that intelligence gathered by the United States, with the help of opposition forces in Syria, shows “with varying degrees of confidence that the Syrian regime has used chemical weapons on a small scale in Syria.” Damascus has denied using chemical weapons, but said the opposition might have used them.

Russian Foreign Minister Sergei Lavrov said last Tuesday that any reports of the alleged use of chemical weapons in the conflict must be carefully investigated to avoid a repetition of the “Iraqi scenario.”

Obama and Putin also discussed their plans to meet in person in June at the G-8 meeting in Northern Ireland and at a bilateral summit in Russia in September.

Putin aide Yury Ushakov told reporters Monday that the September meeting will take place prior to the G-20 summit in St. Petersburg slated for Sept. 5 and 6.

Monday’s call was initiated by the White House, Ushakov added.