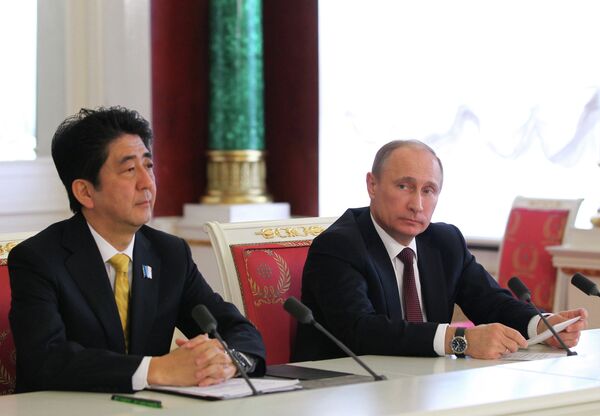 © RIA Novosti . Michail Klimentiev
/
Go to the photo bank
Subscribe
Russia and Japan agreed on Monday to rev up negotiations on a peace treaty, but that does not mean that all problems will be solved overnight, Russian President Vladimir Putin said on Monday.

MOSCOW, April 29 (RIA Novosti) – Russia and Japan agreed on Monday to rev up negotiations on a peace treaty, but that does not mean that all problems will be solved overnight, Russian President Vladimir Putin said.

Japan considers the decision to resume the stalled peace talks between the two countries – which never signed a permanent peace treaty following the end of World War II – a major achievement, Japanese Prime Minister Shinzo Abe said at a news conference after a meeting with Putin in Moscow.

Putin said it would, however, take some time and sustained efforts before all problems could be resolved.

“The negotiations have essentially been frozen in recent years and today we have agreed to resume contact in that area,” Putin said.

“This does not mean that we will settle everything tomorrow, if the problem has not been resolved for the past 67-68 years. But at least we will continue to work on this complex issue that is so important for both countries.”

Russia and Japan also agreed to set up a new “2+2” negotiating format, involving consultations between the two countries’ foreign and defense ministers, which should enhance the level of bilateral trust “in the defense and security field,” Abe said.

Putin said the development of bilateral economic ties with Japan will be the best possible way of addressing a number of issues, including the signing of a peace treaty.

Russian-Japanese relations have been overshadowed by a long-running territorial dispute over the Kuril islands in the north Pacific.

The row over the islands – which Russia calls the Southern Kurils and Japan calls the Northern Territories – has prevented Tokyo and Moscow from signing a permanent peace treaty since the end of World War II.

The disputed islands of Iturup, Kunashir, Shikotan and Habomai are still claimed by Japan. They were occupied by Soviet forces at the end of World War II.

In January, former Japanese Prime Minister Yoshiro Mori suggested Japan should seek the return of just three of the islands, leaving Iturup to Russia, to settle the dispute. But Japan’s Cabinet Secretary Yoshihide Suga said all four islands belong to Japan and the government is not planning to reverse its position.

Russia has maintained it will not give up the islands' sovereignty. In 2010, then-President Dmitry Medvedev sparked a diplomatic row with Tokyo by making the first ever visit by a Russian leader to the islands, and later said Russia would increase its military presence there.