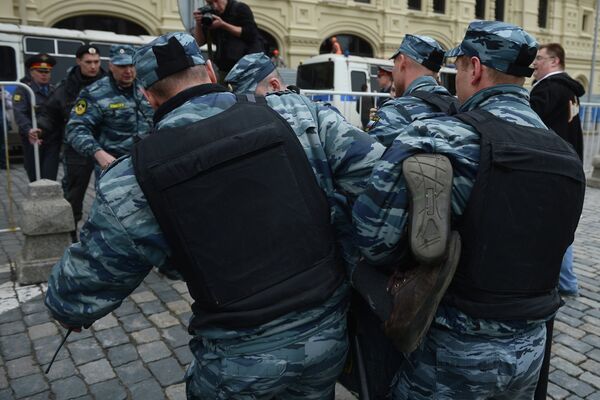 Police detained 27 anti-Kremlin activists on Moscow’s Red Square on Saturday during an unsanctioned protest against the prosecution of people suspected of involvement in violence at a rally against President Vladimir Putin’s rule, a police spokesperson said.

MOSCOW, April 27 (RIA Novosti) – Police detained 27 anti-Kremlin activists on Moscow’s Red Square on Saturday during an unsanctioned protest against the prosecution of people suspected of involvement in violence at a rally against President Vladimir Putin’s rule, a police spokesperson said.

The ovdinfo.org website, which tracks protest-related arrests, also said 27 people had been detained.

Some 50 people took part in the protest, supporters of Left Front leader Sergei Udaltsov, who is currently under house arrest, said on Twitter.

Over 650 people were detained at a May 6, 2012 rally on Moscow’s Bolotnaya Square on the eve of Putin’s inauguration to a controversial third presidential term as police clashed with protesters.

Most were soon released, but a case soon followed into what the investigators called mass riots. The probe is ongoing. The riot allegations are hotly disputed by the opposition, which blames the police for provoking the clashes and claims the case is political.

The 26 people implicated in the case so far include protesters from all walks of life, from students to pensioners to veteran activists.

Udaltsov and two other activists were accused last fall of conspiring with a Georgian politician to organize nationwide disturbances, including the Bolotnaya Square unrest, with the aim of toppling Putin. The charges were brought after a pro-Kremlin TV channel aired what it said was secretly recorded footage of the alleged plotters.

One of the men charged with the plot, Konstantin Lebedev, a former member of a pro-Kremlin youth group who went over to the opposition in 2004, pled guilty to the charges and was jailed for 2.5 years on Thursday.

Udaltsov and the other activist, Konstantin Lebedev – who has been in custody since October – deny the charges, which carry a maximum sentence of ten years behind jail. The Georgian politician allegedly featured in the footage, Givi Targamadze, denies ever meeting the activists. Georgia, which fought a brief war with Russia in 2008, has said it will not extradite him to Moscow.

Red Square protests in support of the suspects have been taking place every Saturday since mid-March.

A much larger rally is expected to take place on the first anniversary of the rally, May 6, in central Moscow.