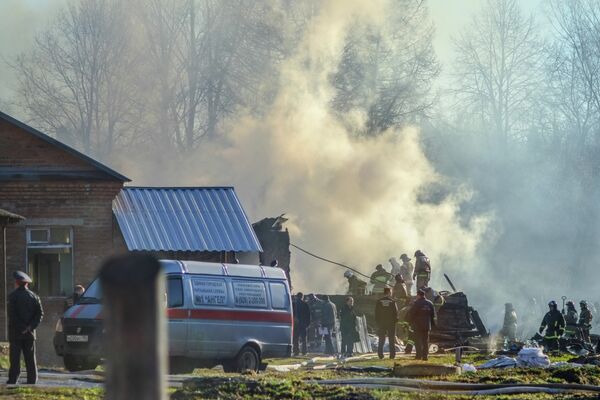 At least 38 people died early on Friday in a fire at a psychiatric hospital in a small town north of Moscow, the Health Ministry said.

MOSCOW, April 26 (RIA Novosti) – At least 38 people died early on Friday in a fire at a psychiatric hospital in a small town north of Moscow, the Health Ministry said.

“Three people survived - a medical nurse led two patients out of the burning building,” Salagay said, adding that a total of 41 people were believed to have been in the one-story building at the time of the fire.

A police source told RIA Novosti that most of the patients in the facility in the small town of Ramenskiy died in their sleep from smoke inhalation as they were likely sedated by prescribed medicine.

Regional emergencies services said 12 bodies have been found so far in the building, which almost completely burned down. The search is being hampered by heavy clouds of smoke around the site.

Investigators working at the scene of the fire, which started at about 2 am and was put out almost three hours later, are considering several possible causes, including a short-circuit, violation of fire safety regulations and even arson.

A criminal case has been opened and the head of the clinic and the surviving nurse are being questioned in connection with the incident, Russia’s Investigative Committee said.

A local emergencies services official told RIA Novosti that firefighters arrived at the scene only an hour after receiving a fire alarm notice.

“The nearest fire station is about 51 kilometers from the site. The firefighters could have arrived earlier if the fire had occurred in summer, as there is a ferry across the river,” said Vadim Belovoshin, deputy emergencies chief for the Moscow region.

“Unfortunately, the ferry is not currently operating,” the official said.

The Moscow Region authorities have declared April 27 a day of mourning for the victims.