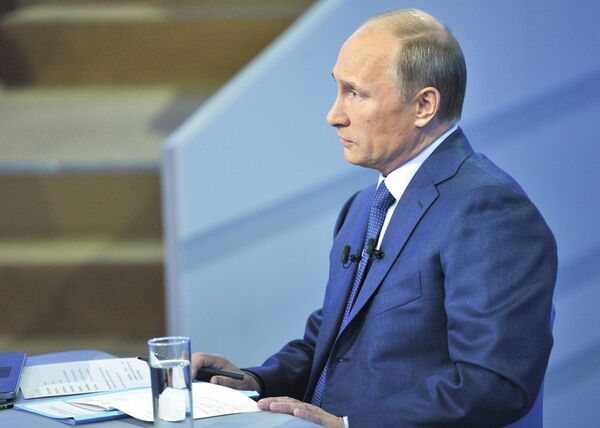 Experts on Harvard University’s scandal-ridden role in Russia’s privatization process in the 1990s expressed skepticism Thursday at Russian President Vladimir Putin’s assertion that US advisers to privatization czar Anatoly Chubais were operatives of the US Central Intelligence Agency (CIA).

Putin did not identify the alleged CIA agents by name during his live Q&A session with the Russian public Thursday, but his mention of the individuals’ alleged financial shenanigans suggests he may have been speaking about respected economist Andrei Shleifer and lawyer Jonathan Hay.

The two men, along with Harvard University, paid a $30 million fine in 2005 to settle US federal charges that they illegally profited off of Russian privatizations. Russian media reports have accused Shleifer and Hay of being CIA officers, though there is nothing in the public domain to suggest either man was employed by the agency.

Janine Wedel, an expert on the Harvard-Russia scandal of the 1990s, said US prosecutors thoroughly documented Shleifer and Hay’s alleged misdeeds while the men advised Chubais and other Russian officials under a Harvard-run program funded by the United States Agency for International Development (USAID).

But Wedel, a professor at George Mason University in Virginia, said that she had seen no evidence that the two men were linked to intelligence services.

“You don’t have to be the CIA to mess things up,” Wedel, who has written extensively about Harvard’s role in Russia’s privatization process in two separate books, told RIA Novosti on Thursday.

During Thursday’s Q&A, Putin said Chubais’ inner circle when he oversaw Russia’s privatization process as deputy prime minister in the 1990s included “advisers who, as it turns out today, worked as career officers in the US CIA.”

“What’s funnier is that after returning to the United States they were taken to court for breaking their country’s laws and getting rich off of the privatization of the Russian Federation and did not have the right to do this as acting intelligence officers,” Putin said, without identifying the alleged operatives by name.

The CIA did not respond to a request for comment Thursday.

Shleifer did not respond to an email and a voicemail requesting comment Thursday, and Hay could not immediately be reached.

The privatization process in Russia in the 1990s, which saw the rapid economic rise of a well-connected class of businessmen and politicians as much of the country sank into poverty, is widely despised by Russians who see the transition as a Western-sponsored plan to enrich an anointed few by hawking the jewels of the collapsed Soviet empires.

Putin has repeatedly disparaged this period as the “wild 1990s,” and arguably no other public figure is as broadly associated with this turbulent era as Chubais.

But while Putin said Thursday that “many mistakes” had been made during the controversial privatization of Russia’s post-Soviet economy, he also praised Chubais and the other reformers for their “courage” in taking the measures they deemed necessary.

Shleifer, a protégé of former US Treasury Secretary and Harvard president Lawrence Summers, and Hay oversaw a Harvard-run program funded by USAID to help transform Russia to a market economy following the collapse of the Soviet Union.

The program, however, was shuttered in 1997 after allegations emerged that the two men, their significant others and business associates were profiting off of insider dealings and misappropriating resources paid for by the US government.

In September 2000, federal US prosecutors filed a lawsuit accusing Shleifer and Hay of defrauding the US government of $40 million and abusing “their positions as high-level and trusted advisors to and on behalf of the United States in Russia” for their own “personal benefit and the personal benefit of their wives, girlfriends and/or business associates.”

Their actions “undercut the fundamental purpose of the United States' program in Russia – the creation of trust and confidence in the emerging Russian financial markets and the promotion of openness, transparency, the rule of law, and fair play in the development of the Russian economy and laws,” prosecutors said in the suit.

Veteran economics author and journalist David Warsh told RIA Novosti that he was also surprised to hear Putin’s comments Thursday that appeared to describe Shleifer and Hay as CIA operatives.

Shleifer’s mentor, Summers, was an undersecretary of the US Treasury in the 1990s and key in setting US economic policy vis-à-vis Moscow, Warsh noted.

“You didn’t need the CIA here if you had a direct line from Shleifer to Summers’ office,” Warsh, who covered the case extensively as a journalist, told RIA Novosti. “Unless Putin’s got something, it would be very hard to persuade anybody that these guys were working for the CIA.”