Russia, US Should Cooperate More Closely on Terror - Putin 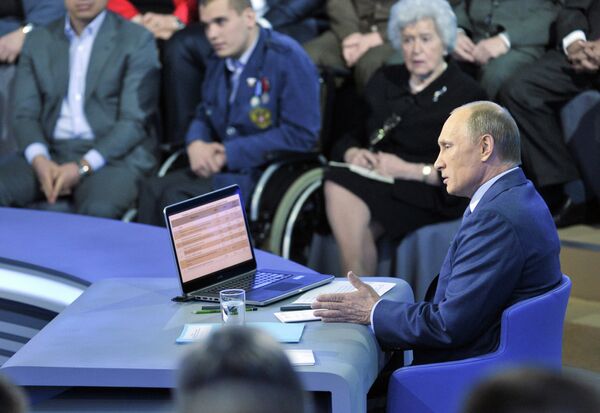 “I just call for this tragedy to be an incentive for us to become closer in tackling common threats, with terrorism being one of the most important and dangerous of them. If indeed we combine our efforts, we won’t take such hits and sustain such losses,” he said.

The Russian president said he had always resented it when terrorists who committed “savage, bloody, appalling crimes on Russian territory were referred to in no other way but rebels, and were seldom or never called terrorists” by Western media and politicians.

“They received aid, information support, as well as financial and political [aid]. Sometimes directly, sometimes indirectly, but they always had it for their activities on Russian territory,” Putin said. “But we have always said that we should not just make statements about it being a common threat, we should take the matter into our hands and cooperate with each other more closely.”

The Associated Press cited two unnamed US officials as saying on Thursday that the Russian government had contacted the FBI and the CIA separately in 2011 with concerns about Tamerlan Tsarnaev, one of the two brothers the authorities suspect of being behind the twin blasts at the finish line of the Boston Marathon that killed three and injured about 200 on April 15.

The brothers have been identified as ethnic Chechens who lived in Dagestan, a violence-ridden republic in Russia’s North Caucasus region, and the Central Asian republic of Kyrgyzstan before moving to the United States nearly a decade ago.

Tamerlan Tsarnaev, 26, was killed during a shootout with police in the Boston suburb of Watertown on Friday. His brother Dzhokhar was apprehended hours later. He remains in a Boston hospital where he is being treated for injuries to his head, neck, legs and hand.

Dzhokhar Tsarnaev has been charged with using a weapon of mass destruction, which could carry the death penalty.