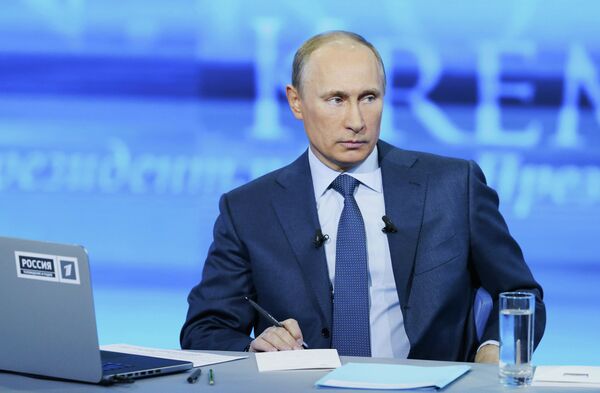 MOSCOW, April 25 (RIA Novosti) – President Vladimir Putin responded on Thursday to criticism of his government’s work, saying ministers should be given more time to show results.

“As for particular government members or the government as a whole, I have heard, of course, numerous calls to sack this or that minister or dismiss the entire government. I share the viewpoint that demands on all levels of power should be firm, but I want to draw your attention to the fact that the government has not yet worked for a year,” Putin said at a Q&A conference on Thursday.

The Russian government, led by Prime Minister Dmitry Medvedev, has drawn criticism lately over its failure to present a program for diversifying the country’s economy away from its dependence on high oil prices, Russia’s key export commodity, and spur its faltering economic growth.

Putin said government members have come in for a lot of criticism, but replacing them now would be unfair and possibly harmful.

“But we need to give them time [ministers] to realize themselves, or we need time to understand who is unable to do that. It is impossible to understand that over a period of one year. There is a colossal amount of responsibility and work [in the government]. A reshuffle would bring more harm than benefit,” Putin said.

“In less than a year he has been officially reprimanded by the Russian president, has antagonized the country’s teachers and become an object of derision among young people – schoolchildren, undergraduates and postgraduates,” Zyuganov said.

Zyuganov slammed the ministry’s education program as “anti-national,” referring in particular to Livanov’s calls for the number of students receiving state scholarships to be slashed, and his support for a plan to establish federal educational standards for high schools, which the Communist Party says could destroy the general education system in Russia.