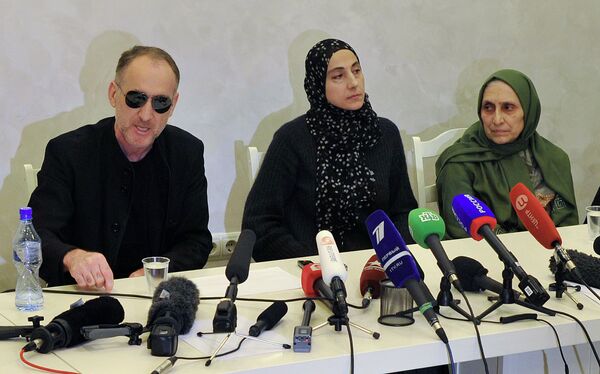 The father of the two suspects in the Boston Marathon bombings said on Thursday he will not seek to avenge the death of his son Tamerlan, and that he plans to move his US daughter-in-law and granddaughter to Russia to be near him.

MOSCOW, April 25 (RIA Novosti) – The father of the two suspects in the Boston Marathon bombings said on Thursday he will not seek to avenge the death of his son Tamerlan, and that he plans to move his US daughter-in-law and granddaughter to Russia to be near him.

“I will not try to avenge anybody; I simply want to get my son back and bury him here,” their father Anzor Tsarnaev, a resident of Russia’s volatile southern republic of Dagestan who previously lived in the US with his family, said at a news conference in Makhachkala.

“I do not hold any religious or extremist views,” he said, adding that he wanted to bring Tamerlan’s wife and child over to Russia.

The older Tsarnaev brother, Tamerlan, 26, who had an American wife and young son, died in a shootout with police on Friday. A few hours later his younger brother, Dzhokhar, 19, was captured after a manhunt that shut down much of Boston and its surrounding areas. He remains in a Boston hospital where he is being treated for injuries to his head, neck, legs and hand.

Dzhokhar has been charged with using a weapon of mass destruction, which could carry the death penalty.

He denied media reports quoting Tamerlan’s aunt as saying her nephew’s body had already been handed over to his relatives in the US.
“My son’s body has not been handed over. We don’t even know where it is,” Tsarnaev told RIA Novosti.
He said he was going to fly to the United States tonight.
“I’m packing now,” he said.

He said Zubeidat Tsarnaeva, the mother of the two suspects, has no plans yet to return to the United States, but that he will fly there today or tomorrow.

Tsarnaeva, who is currently in Dagestan with her husband, said on Thursday she is considering giving up her US citizenship over the incident.

She has repeatedly stated that her sons were innocent and that they were framed.

A police source had previously told RIA Novosti that the suspects’ parents had agreed to visit the United States to assist in the ongoing investigation, after a team from the US Embassy in Moscow spoke with them in Dagestan this week.

Tsarnaeva could be arrested if she returns to the United States, said a clerk at the district court in Natick, Massachusetts, during a phone conversation on Wednesday with RIA Novosti.

According to the clerk, court documents show Tsarnaeva was arrested for shoplifting last year at a Lord & Taylor department store in Natick after security workers called police. She was accused of stealing $1,600 worth of clothes from the store.

Tsarnaeva was arrested on June 13, 2012 and arraigned the following day on one count of larceny and two counts of malicious damage to property. Court documents show she had several pre-trial dates in 2012, but didn’t show up.

She dismissed the theft charges against her on Thursday as “nonsense.”

Her sons are suspected of having planted the homemade bombs that exploded at the Boston Marathon finish line on April 15, killing three people and injuring more than 200.