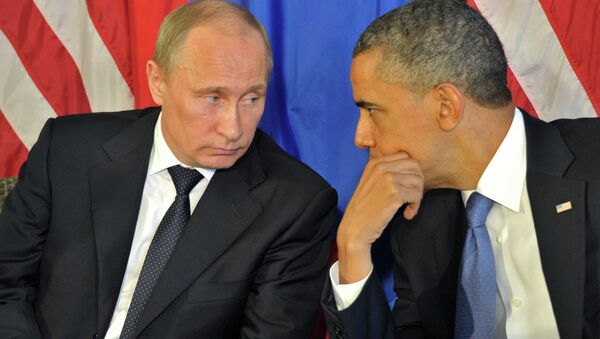 More than a decade after Russia offered staunch support to the United States following the 9/11 terror attacks, bilateral relations could receive another boost as US authorities investigate two brothers with ties to Russia’s turbulent North Caucasus region in connection with last week’s deadly Boston Marathon bombing.

“Now that we ourselves have experienced terror that has a North Caucasus dimension, it certainly gives a chance to revive counterterrorism cooperation,” Angela Stent, director of the Center for Eurasian, Russian and East European Studies at Georgetown University, told RIA Novosti on Wednesday.

US investigators say the April 15 attack was carried out by brothers Tamerlan and Dzhokhar Tsarnaev, two ethnic Chechens who lived in Dagestan, a violence-ridden republic in Russia’s North Caucasus region, and the Central Asian republic of Kyrgyzstan before moving to the United States nearly a decade ago.

US President Barack Obama spoke by telephone last week with his Russian President Vladimir Putin, who “expressed his condolences on behalf of the Russian people” following the twin bombings, which killed three and wounded more than 200 others, the White House said in a statement.

Putin proceeded to throw logistical, intelligence and moral support to US counterterrorism operations in Afghanistan in what was widely seen as his attempt to improve Moscow’s ties with Washington and earn greater credibility in the West for the Kremlin’s attempt to stamp out an insurgency in the mainly Muslim region of Chechnya in the North Caucasus.

US-Russia ties, however, proceeded to wither precipitously during Bush’s two terms in office as Washington and Moscow clashed over the US-led military incursion into Iraq, US plans to place elements of a missile defense system in Eastern Europe, the eastward expansion of the North Atlantic Treaty Organization (NATO) and US support for Western-looking governments in former Soviet republics like Ukraine and Georgia.

Relations between the two countries reached a nadir in August 2008, when the Russian military crushed the forces of US ally Georgia in a short war over the Moscow-backed region of South Ossetia, which is recognized as independent of Georgia by Russia and a handful of other nations.

Obama’s so-called “reset” policy with Moscow has secured agreements on arms control and counterterrorism, but ties have remained fraught since last fall over US allegations of Russian human rights abuses and Russia’s accusations of American meddling in its domestic affairs.

The Boston Marathon bombings offers the two countries a chance to reset cooperation in the field of counterterrorism, said Simon Saradzhyan, an expert on security and Russian politics at Harvard University’s Belfer Center for Science and International Affairs.

But reports that Russian authorities alerted the Americans in 2011 about Tamerlan Tsarnaev’s possible attraction to radical Islam also highlight how mistrust between the two countries can have deadly consequences, he added.

“The fact that [the Russian reports] didn’t lead anywhere reveals a lack of trust,” Saradzhyan told RIA Novosti on Wednesday. “And if you don’t have trust, you can’t really build a lasting relationship in which neither side is suspicious that the other is secretly pushing some kind of hidden agenda.”

Fiona Hill, director of the Center on the United States and Europe at the Brookings Institution, a Washington-based think tank, said this chasm in trust will be difficult to bridge given US concerns about Moscow’s methods in dealing with insurgents in the North Caucasus and Russia’s view of Washington’s hypocrisy “given our own methods of dealing with terrorist suspects in Iraq, Afghanistan and elsewhere.”

Both sides are likely to approach any renewal of counterterrorism cooperation with a more realistic assessment of how partnership in this sphere can impact broader bilateral ties, Stent told RIA Novosti.

“Everyone’s expectations will be a little more moderate than after the Sept. 11 attacks, when there was this idea that this could lead to a qualitatively different US-Russian partnership,” she said.

But taken together with a recent visit to Moscow by Obama’s national security adviser, Tom Donilon, for talks on a range of issues, including missile defense and arms control, the tragedy in Boston could spur a modest rapprochement between the two sides, Stent added.

Broadening this basis for cooperation—primarily in the area of trade—could put US-Russia ties on even firmer footing, Saradzhyan said, adding that two planned meetings between Putin and Obama later this year also provide grounds for optimism that relations could improve.

But domestic political developments—such as the countries’ recent tit-for-tat blacklists of Russian and US officials in connection the US Magnitsky Act—could scuttle cooperation on counterterrorism and other areas, Saradzhyan added.