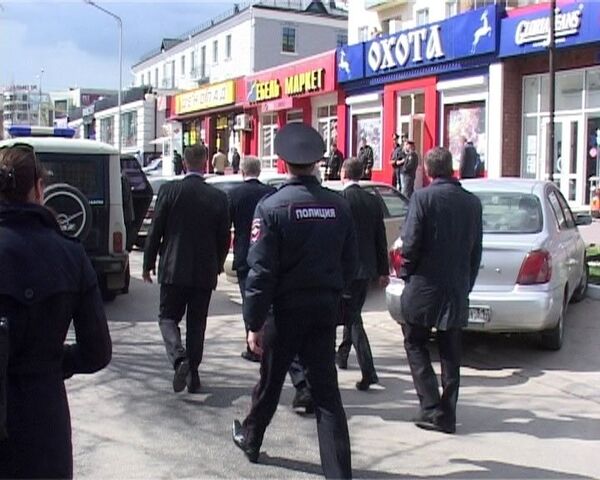 © Photo : Belgorod Interior Ministry
Subscribe
Russian police posted a reward of at least 3 million rubles ($95,000) on Tuesday for information leading to the arrest of the man suspected of shooting dead six people in Belgorod in southwest Russia on Monday afternoon.

MOSCOW/BELGOROD, April 23 (RIA Novosti) – Russian police posted a reward of at least 3 million rubles ($95,000) on Tuesday for information leading to the arrest of the man suspected of shooting six people dead in Belgorod in southwest Russia on Monday afternoon.

The suspected assailant, named by police as 31-year-old Sergei Pomazun, opened fire at random victims with a rifle in a hunting store before moving onto the streets in the center of Belgorod and continuing the shooting spree. He later fled in the same vehicle in which he had arrived at the scene.

Police and the city administration said a 14-year-old girl was among the dead, five of whom died at the scene of the attack. The sixth victim, a 16-year-old girl, died shortly afterwards in hospital.

Pomazun's car was later found by police, who said the suspect already has a criminal record. He remains at large, and may be armed with two hunting rifles he took from the hunting store, the police said on Tuesday.

Shocked residents in the city of some 356,402 people have brought flowers, toys and candles to the crime scene, where a black plaque with the victims’ names engraved on it appeared on Tuesday. Two days of mourning were announced in Belgorod on Tuesday.

"When I heard [about the tragedy], the first question I wanted to ask the president during the call-in show on April 25 was: When will this mess, this irresponsibility, impunity, corruption in all agencies end?" Viktor Logvinov, one of the residents who came to pay their respects, told RIA Novosti, referring to the police’s failure to catch the gunman. He added that people are now scared to walk the streets.

Special police forces and investigators from the neighboring Kursk and Voronezh Regions have headed to the Belgorod Region to join the massive manhunt involving some 2,000 law enforcement officers, according to a police source. Moscow’s OMON riot police and Interior Ministry special task detachments were also dispatched to the region on Tuesday. Ukraine, which shares a border with the Belgorod Region, has also been warned about the fugitive killer.

Three criminal cases have been opened and united into one, which includes murder charges. Pomazun, who once served four years on theft-related charges, faces life in prison if convicted of murder.

The investigators said Tuesday that "a search of the suspect’s apartment revealed that he had broken into his father’s rifle safe" and taken his hunting weapon. Later the gunman drove his father’s black BMW X5 vehicle to the hunting store, where he shot two store assistants and a customer before moving outside and killing passers-by.

The suspect’s 55-year-old father told investigators that his son had previously shown signs of violent and aggressive behavior toward his parents, and had been known to inflict injuries on them.

“They [the parents] have made police statements twice over such incidents, but police officers arrived and didn’t take any action against Sergei Pomazun,” the Investigative Committee said in a statement.

Earlier media reports had suggested a second suspect was involved in the attack, but the police said on Tuesday that Pomazun had acted on his own. There is not yet any indication of the suspect’s motive for the crime.

The city’s welfare department has opened a bank account for donations for the victims’ families.