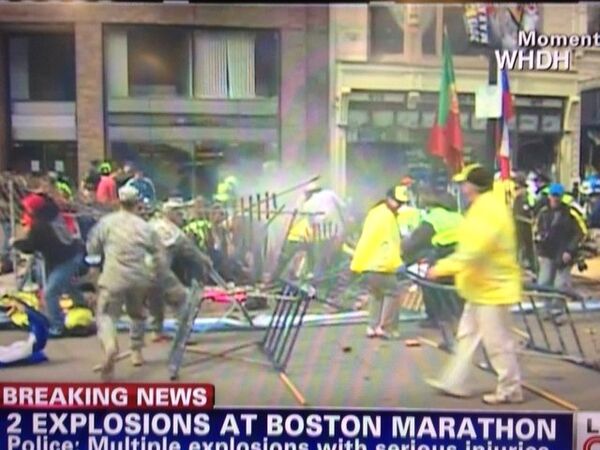 © Photo : CNN
Subscribe
Days after receiving praise for quickly identifying the two suspects in the Boston Marathon bombings, US lawmakers questioned members of the Federal Bureau of Investigation (FBI) Tuesday over whether they had brushed off Russian concerns about one of the bombing suspects, Tamerlan Tsarnaev.

WASHINGTON, April 23 (RIA Novosti) – Days after receiving praise for quickly identifying the two suspects in the Boston Marathon bombings, US lawmakers questioned members of the Federal Bureau of Investigation (FBI) Tuesday over whether they had brushed off Russian concerns about one of the bombing suspects, Tamerlan Tsarnaev.

House of Representatives Speaker John Boehner said on Fox Television that the “FBI’s going to have their opportunity to lay all this information out” in closed-door Senate and House hearings on Tuesday, but added that it was still too early to judge whether the bureau had “dropped the ball” on Tamerlan Tsarnaev, who, with his younger brother Dzhokhar, is suspected of planting the homemade bombs that exploded at the finish line of the Boston Marathon on April 15, killing three people and injuring more than 200.

The Tsarnaevs are ethnic Chechens and spent part of their lives in Dagestan, which is next to Chechnya in the volatile North Caucasus region of Russia. Chechnya has been described by the conservative Washington Times newspaper in recent days as “a hotbed of Islamic extremism since its failed war for independence in the 1990s.”

The FBI said in a statement that the bureau was asked by Russia in 2011 to investigate Tamerlan Tsarnaev over concerns that he had turned to radical Islam and “had changed drastically since 2010 as he prepared to leave the United States for travel to the country’s region to join unspecified underground groups.”

The FBI said that after receiving the request from the Russians, it “checked US government databases and other information to look for such things as derogatory telephone communications, possible use of online sites associated with the promotion of radical activity, associations with other persons of interest, travel history and plans, and education history.”

FBI agents interviewed Tamerlan Tsarnaev and family members, but found no cause to suspect any involvement in terrorist activity, either domestic or foreign. It said it handed the results of its investigation to the Russians in the summer of 2011.

US Sen. Saxby Chambliss, who co-chaired the closed-door Senate Intelligence Committee hearing Tuesday, told CNN the FBI “did a very thorough investigation of Tamerlan when they were notified by a foreign intelligence service.”

Chambliss placed some of the blame for allowing Tsarnaev’s scent to go cold on the Russian intelligence service, saying the FBI “went back and asked for additional information not once, not twice but three times, and they got no further information on exactly why that agency thought this individual might be radicalized.”

Former US Ambassador to Moscow Thomas Pickering also said the Russians had failed to provide the FBI with more information on Tsarnaev.

“The Russians had asked us for information on the Tsarnaevs, and the FBI looked at it and it didn’t meet any of their profiles or turn up any data, but they told the Russians what they had,” Pickering told RIA Novosti.

“The FBI went back to the Russians later and asked for more information but didn’t get anything,” he said.

“I guess the FBI gets a lot of these things but the fact is they did respond and cooperate with the Russians on the whole thing, which I suspect absolves them about being not alert enough. Now they’re getting pilloried,” he said.

In 2012, Tsarnaev made a trip to the North Caucasus region to visit his parents and other relatives – a trip that Republican US Sen. Lindsey Graham has said in recent days the FBI failed to pick up on.

But US Secretary of Homeland Security Janet Napolitano told Graham in a Senate Judiciary Committee hearing on Tuesday that “the older brother -- the suspect who was killed -- when he left to go back to Russia in 2012, the system picked up his departure.”

Where the system failed was when he returned to the United States several months later, she said. “The FBI alert on him was more than a year old and had expired.”

Other US officials have defended the FBI, which only days ago was being hailed for its handling of the investigation into the Boston Marathon bombings – even by Graham who said in a statement posted on the home page of his official website, “We applaud our law enforcement for their hard work and bravery in Boston.”

White House spokesman Jay Carney said the bureau had “thoroughly investigated” Tsarnaev’s activities when asked to do so by the Russians, adding that the United States will continue to have “active cooperation” with Russia on security and counterterrorism issues.

Napolitano said the bureau’s cooperation with other law enforcement agencies was “a model of cooperation for the rest of the world.”

The FBI refused to say which officials from the bureau attended the closed door hearings on Capitol Hill Tuesday, saying in an email, “As this is a closed hearing, we have nothing to comment on at this time.”