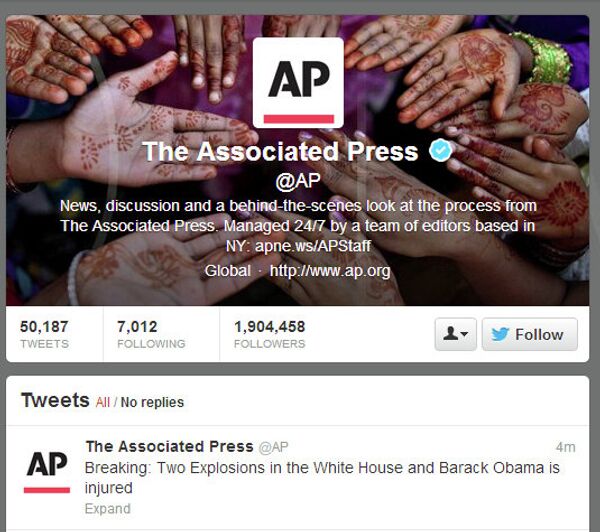 © Photo : Twitter
Subscribe
The report of two explosions at the White House on Tuesday was not real, but the stock market free fall that briefly followed, was.

WASHINGTON, April 23 (RIA Novosti) – The report of two explosions at the White House on Tuesday was not real, but the stock market free fall that briefly followed, was.

“Breaking: Two Explosions in the White House and Barack Obama is injured,” read the tweet sent out on the Associated Press (AP) Twitter account at 1:07 p.m. EDT (1707 GMT).

Within minutes the Dow Jones industrial average had plummeted from 14,699 to 14,555, but recovered within minutes as the AP tweeted that the report was a fake.

"All: The main @AP Twitter account has been hacked, The tweets coming out of there are false. We are working to correct the problem," the Associated Press Twitter feed said, shortly before its main account was suspended.

Various other AP accounts also tweeted the news of the bogus report.

"The official @AP account has been hacked!" read a posting from @APEntertainment . "No explosions at the White House, Barack Obama not injured."

Minutes later, White House spokesman Jay Carney assured reporters at the daily White House press briefing, "The president is fine," adding, "I was just with him."

The AP has 1.9 million followers, and the phony message was re-tweeted more than 1,800 times before it was taken down.

The Syrian Electronic Army, a technologically savvy group that supports the Syrian government and President Bashar al-Assad quickly took credit for the false tweet. The same group has claimed responsibility for online attacks to Reuters and Al Jazeera last year, and more recently to National Public Radio, CBS News and the BBC.