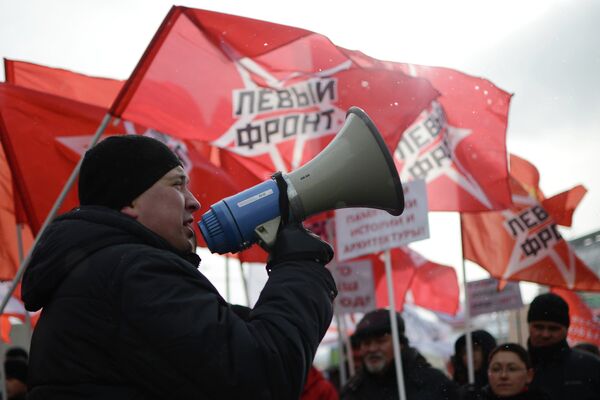 © RIA Novosti . Vladimir Astapkovich
/
Go to the photo bank
Subscribe
Sergei Udaltsov, a leader of the Left Front political movement, said on Friday that his organization would change its name in response to a ban on its activities by the Prosecutor’s Office.

MOSCOW, April 19 (RIA Novosti) – Sergei Udaltsov, a leader of the Left Front political movement, said on Friday that his organization would change its name in response to a ban on its activities by the Prosecutor’s Office.

Moscow prosecutors said on Friday they had ordered a three-month suspension of the activity of the Left Front political opposition movement for suspected violations of the law on public organizations.

"Starting from today, the activity of the Left Front public association is suspended for three months, until July 19, 2013,” the Moscow Prosecutor’s Office said in a statement posted on its website.

Prosecutors suspect the Left Front, established in 2008, of possessing property and collecting donations without registering as a legal entity, which is banned by the law.

The Left Front movement unites a number of far-left political organizations. It is headed by Udaltsov, one of the figureheads of the anti-Putin protests, who is currently under house arrest pending an investigation into his role in last year’s Bolotnaya Square unrest, in which a political protest rally turned violent.

Udaltsov said in his Twitter account that the organization would endeavor to fix all irregularities as soon as possible, and would continue to function under a different name for the time being.

“We will take urgent measures to eliminate all barriers to the Left Front’s activities. Until July 19 our organization, which has been temporarily banned by the prosecutors, will operate under the name of New Left Front,” he said.

The opposition activist described the prosecutors’ actions as illegal and politically motivated.

Another Left Front coordinator, Alexei Sakhnin, said the decision on whether the prosecutors’ decision would be appealed in court is yet to be made by the organization’s leadership.