For Boston Suspects, Was Chechnya’s Violent Past a Motive? 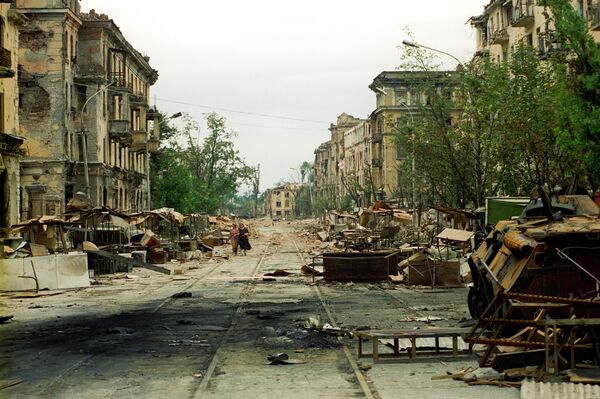 As investigators hunt for evidence about the Boston bombing suspects, some of their questions – like the American public’s – will focus on Russia’s restive North Caucasus, including the war-scarred republic of Chechnya, a region that has produced a number of violent militant groups, but none that has been linked to terror attacks against the West.

MOSCOW, April 19 (Nabi Abdullaev, RIA Novosti) – As investigators hunt for evidence about the Boston bombing suspects, some of their questions – like the American public’s – will focus on Russia’s restive North Caucasus, including the war-scarred republic of Chechnya, a region that has produced a number of violent militant groups, but none that has been linked to terror attacks against the West.

The jumble of press and police reports from Russia and the United States suggests that the two suspects, identified by US security officials as Dzhokhar and Tamerlan Tsarnaev, 19 and 26 years old, respectively, hailed from a family of ethnic Chechens who fled the first war in their home republic in the mid-1990s. Afterward, they apparently lived in other parts of the former Soviet Union, also possibly Turkey, and came to the Massachusetts area sometime around 10 years ago.

There is no evidence linking the suspects to any established terror network – in fact, some security analysts have already said such a link is unlikely – but in piecing together their personal motivation, the metastasizing violence plaguing the North Caucasus over the past two decades may be a piece of the puzzle.

Known for deadly bombings and hostage-takings at home in Russia, the North Caucasus rebel movement dates back to the early 1990s when Chechnya attempted to break away from Moscow’s rule. Initially, the movement was a secular, separatist effort. After a botched and brutal military campaign by Russian troops in 1994-1996, the republic gained de-facto independence, but quickly descended into chaotic failed-state status.

In the meantime, radical Islam had started gaining popularity in a number of the region’s half dozen or so republics, especially among local young people seeking a counterweight against corrupt ruling elites and increasingly brutal law enforcers backed by the federal government in Moscow.

In the second half of the 1990s, numerous reports and investigations pointed to ties between the Chechen rebels and a global jihadist effort, including future members of al-Qaida. Hundreds of transnational jihadists led by the Jordanian-born Emir Khattab travelled to Chechnya in 1995-1996 to support the separatists and remained there with the proclaimed aim of transforming the region into what they called an “emirate” and part of the “global jihad.”

In 1996, the current al-Qaida leader and Osama bin Laden’s then lieutenant, Ayman al Zawahiri, travelled to the North Caucasus to recruit supporters there, according to a 2002 Wall Street Journal investigation. He was detained, spent six months in a prison – for visa violations – in Dagestan, a predominantly Muslim-populated Russian region neighboring Chechnya, and then was released.

Moscow’s second war with Chechnya began after Islamist militants from the republic invaded Dagestan in August 1999. Press speculation about Moscow’s role in provoking the attack was rife at the time; nonetheless, it took a couple of years for the federal government to quash the insurgents by allying with several powerful Chechen strongmen. The son of one of them, Ramzan Kadyrov, is currently Chechnya’s leader and has been instrumental in helping Moscow establish control over the republic and keep the remaining Islamist fighters on the run.

In the late 1990s, the violent insurgency, once concentrated in Chechnya, started spreading to neighboring republics in southern Russia. Local Islamist networks emerged, with some developing into powerful terrorist organizations. The latest high-profile terrorist attacks in Russia – like the bombing of Moscow’s Domodedovo airport in 2011 and of two Moscow metro stations in 2010  – originated in Chechnya’s neighboring provinces, respectively, Ingushetia and Dagestan, where the Tsarnaevs reportedly lived for a time.

After the United States launched its “war on terror” in Afghanistan in the wake of the 9/11 bombings, media outlets and social networks were full of intense speculation about Chechen rebels fighting alongside the Taliban against US-led troops there. However, no Chechens have been encountered by reporters or researchers on the ground, and the handful of Russian nationals captured in Afghanistan and Pakistan and held for a time at the Guantanamo prison came from other Russian regions.

Chechen rebels have always concentrated their fight on Russia and have not proclaimed targets in the West.

However, in 2003 the US State Department included three rebel groups fighting in Chechnya on its list of international terrorist organizations, and then-U.S. Secretary of State Colin Powell designated Chechen rebel leader Shamil Basayev a threat to the security of the United States and to US citizens.

Powell, in a notice in the Federal Register, said Basayev "has committed, or poses a significant risk of committing, acts of terrorism" against US interests.

Basayev, killed in 2006, had been behind major terrorist attacks on Russian soil, including a 2002 mass hostage-taking in a Moscow theater and the 2004 siege of a school in Beslan, North Ossetia, which led to hundreds of deaths among civilians.

As recently as May 2011, the US State Department added the Islamic Caucasus Emirate, or Imarat Kavkaz, the biggest of the known Chechen rebel group, led by warlord Doku Umarov, to its list of terrorist organizations.

While there have been no proven reports about the involvement of fighters from the North Caucasus in terrorist attacks in the West, earlier this month the Syrian government included several of them in a list of foreign nationals killed in fighting there against government troops, which was handed over to the UN. And a Russian-language Islamist website calling on jihadists to take part in the fighting in Syria – and claiming that militants from the North Caucasus are already there – appeared online just last month.