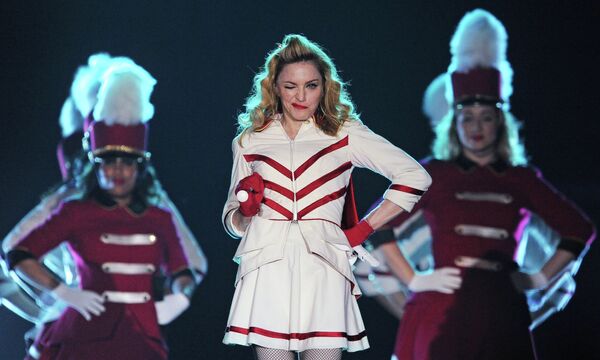 © RIA Novosti . Ramil Sitdikov
/
Go to the photo bank
Subscribe
A St. Petersburg Сity Сouncil deputy has asked the Russian Prosecutor General's Office to look into the alleged violation of immigration and tax legislation by the organizers of a concert by US pop diva Madonna in Russia.

ST. PETERSBURG, April 19 (RIA Novosti) – A St. Petersburg Сity Сouncil deputy has asked the Russian Prosecutor General's Office to look into the alleged violation of immigration and tax legislation by the organizers of a concert by US pop diva Madonna in Russia.

The visa that was issued for Madonna did not give the singer the right to receive revenue from her performances in Russia, which she gave in August 2012, Vitaly Milonov said.

Madonna and Her Merry Drummers on the Olympic Stadium Stage

“I do not like the fact that a person earned money in Russia and did not pay taxes,” the lawmaker said. According to him, the singer received $1.1 million for her concert in St. Petersburg on August 9.

An investigation conducted after the concert found that the organizers did not violate Russian legislation, Yelena Dunayeva, head of the St. Petersburg and Leningrad Region Federal Migration Service, said.

“Dunayeva ignored the fact that the performance was given on a paid basis. Undoubtedly, this was entrepreneurial activity without permission, that’s why I want to check whether she [Madonna] received the revenues from the performances legally,” Milonov said.

Milonov, the author of St. Petersburg's "anti-homosexual propaganda” bill, had earlier accused Madonna of carrying out gay propaganda during her concert in St. Petersburg.

During her show at St. Peterburg’s largest concert hall, attended by 25,000 people, Madonna complained about “growing intolerance” in the world and called for solidarity with gays and lesbians. She had pink armbands distributed in the audience and asked her fans to raise their hands in support of homosexuals. Madonna also spoke out in support of the all-female punk band Pussy Riot.

Activists from the St.Petersburg-based civil group Parental Control had also asked police to probe Madonna’s actions, claiming that the concert was attended by children as young as 12 and accusing the singer of violating a local law prohibiting the propaganda of homosexuality among minors.

The controversial law came into effect in St. Petersburg last March and has been strongly criticized by human rights groups.