Russian, US Officials Meet on Adoptions 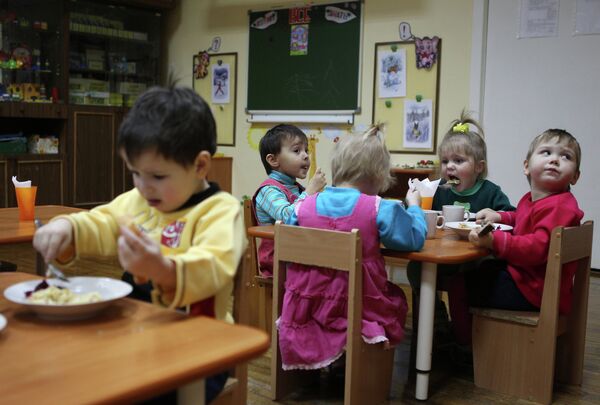 © RIA Novosti . Konstantin Chalabov
/
Go to the photo bank
Subscribe
Russian and US officials met here Wednesday to discuss adoption issues in the wake of Russia’s ban on adoptions of Russian children by US citizens, officials said.

WASHINGTON, April 17 (By Maria Young for RIA Novosti) – Russian and US officials met here Wednesday to discuss adoption issues in the wake of Russia’s ban on adoptions of Russian children by US citizens, officials said.

The meeting was requested by the United States, and the Russian delegation to the talks was led by Konstantin Dolgov, the human rights ombudsman for the Russian Foreign Ministry, a US State Department spokesman said.

Details on what was discussed were not immediately available after the meeting, which was also attended by officials from the departments of State, Homeland Security, Justice and Health and Human Services, the official said.

But adoption experts said the two countries were looking for ways to smooth pending adoption questions on both sides that have been left unresolved since the start of the year when the Russian ban went into effect.

“The US perspective on this meeting is, ‘how many families can we get through the pipeline’?” Chuck Johnson, executive director of the National Council for Adoption, a nonprofit adoption advocacy and research group, told RIA Novosti.

“And I think the Russian focus is going to be on how best to implement the agreement that went into effect before the ban, and which is still in effect for those adoptions that have already taken place.”

Adoptions of Russian children by US parents have long been complicated by a range of thorny legal and cultural issues on both sides of the equation and a new bilateral adoption treaty that went into effect late last year was designed specifically to help resolve many of them.

Privately however, officials in both countries had questioned how effective the new treaty would be. And although Russia has made clear the provisions of the treaty remain in effect for now, the two sides have made little progress in clarifying many adoptions that were already in progress when the ban was imposed.

The Russian adoption ban came just days after US President Barack Obama signed the controversial Magnitsky Act – a law banning Russian officials deemed by Washington to have violated human rights from obtaining visas to enter the United States and freezing any US assets they may have.

Russia had long said it would regard passage of such legislation by the United States as an unwarranted and unfriendly act and would respond as it judged appropriate. The tangle over the new US law and the Russian adoption ban that followed has put a serious dent in relations between the two countries in recent months.

US adoption officials estimate that there are around 200 American families who were matched with 278 Russian children they had already met and were hoping to adopt when the ban went into effect on January 1 this year.

Despite the depressed atmosphere surrounding the adoption issue, families who were in the process of adopting a Russian child said they were cheered by the fact that the two countries were talking about the problems face to face.

“We have great hopes for some movement with the delegation in town, just to know that they’re even discussing it,” said Ann Suhs, a resident of Georgia who along with her husband, Kurt, was in the process of adopting a second child from Russia when the ban took effect.

“We haven’t had a peep since January and I feel like I’m ticking off the days on a child’s life. It’s one less day of hugs and experiences and living at home with us, and that’s hard because every day a child gets older and it’s less and less family,” Suhs said.