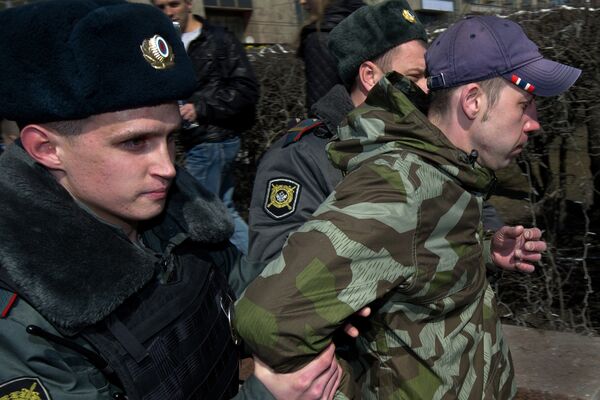 Police in Moscow detained dozens of people on Saturday as some 200 nationalists gathered in the center of the city, a police spokesman said.

MOSCOW, April 13 (RIA Novosti) - Police in Moscow detained dozens of people on Saturday as some 200 nationalists gathered in the center of the city, a police spokesman said.

Nationalists chanting “Russian for Russians!” and Moscow for Muscovites!” gathered at Moscow’s Pushkin Square, before splitting into two groups, the grani.ru website said. The first group marched to a local police station, while the second headed to the nearby Manezhnaya Square, the scene of the 2010 race hate riots that rocked the Russian capital.

Nationalist marches were planned in over 20 cities across Russia on Saturday to protest the stabbing of two ethnic Russian football fans in the southern Russian city of Rostov-on-Don during a clash with men said to be from Russia’s North Caucasus region.

Racial tensions in Russia have been exacerbated by mass labor immigration from former-Soviet Central Asian republics such as Tajikistan, and by frequent clashes in Moscow and other major cities between ethnic Russians and youths from the North Caucasus.

In an unrelated protest also held on Saturday, police detained seven protesters on Red Square at an unsanctioned demonstration against the prosecution of people suspected of involvement in unrest at a May 2012 rally against President Vladimir Putin.