Zenit's Troubled New Stadium to be Finished in 2015 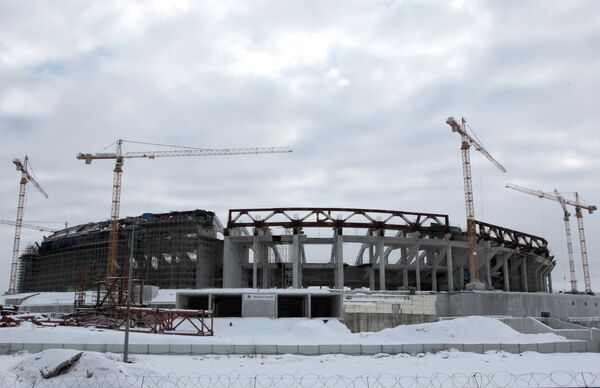 © RIA Novosti . Igor Russak
/
Go to the photo bank
Subscribe
The workforce assembling Zenit St. Petersburg's trouble-hit new football stadium is to double by the end of the summer in an attempt to finish it by the end of 2015, the contractor said Friday.

ST. PETERSBURG, April 12 (R-Sport) - The workforce assembling Zenit St. Petersburg's trouble-hit new football stadium is to double by the end of the summer in an attempt to finish it by the end of 2015, the contractor said Friday.

Estimates that the 69,000-capacity arena, the venue for a World Cup 2018 semifinal, would be completed by next year have long thought to have been optimistic.

The arena has been hit by a spate of expensive construction mishaps, and the design had to be changed after work started in 2006 to conform to FIFA standards.

But building firm Transstroi released a statement Friday saying the number of construction workers at the site on St. Petersburg's Krestovsky Island would double from 1,200 to 2,500 by the end of August.

"In the warmest summer months, the workers will attend to the metalwork, the fixed roof and pylons, complete the stadium bowl and start to assemble the facade," the statement quoted project chief Karen Mdivanyan as saying. All work should be finished by the end of 2015, the statement added.

The project's astronomical cost was last month revised down to $1.1 billion, still far more than double the initial estimate.

In January, Russia's Audit Chamber uncovered several violations at the stadium site, including the absence of a building permit for work performed from 2006 to 2008. Moreover, 63,000 seats, which cost $9.4 million, according to the Audit Chamber, were deemed unfit for use at the 69,000-seat stadium.

The infractions prompted Russian prosecutors to launch a fraud investigation in February into whether the soaring building costs at the World Cup 2018 semifinal site were a result of theft.

In the weeks since, problems have continued to pile up. In March, a builder was killed after being struck by an errant piece of metal. Then, a few days later, prosecutors filed 15 charges against a company that employed illegal immigrants at the construction site.