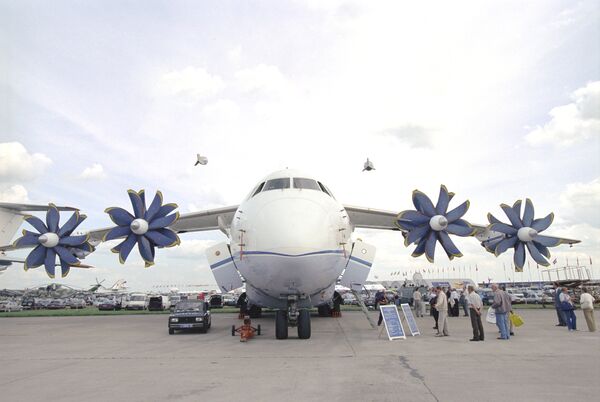 Ukraine will continue its project to build Antonov An-70 tactical transport aircraft even if Russia withdraws from it, Ukrainian Prime Minister Mykola Azarov said on Friday.

KIEV, April 12 (RIA Novosti) – Ukraine will continue its project to build Antonov An-70 tactical transport aircraft even if Russia withdraws from it, Ukrainian Prime Minister Mykola Azarov said on Friday.

Dmytro Kyva, president of the Ukrainian state company Antonov, said during the LAAD international aerospace and defense exhibition in Rio de Janeiro on Thursday that his company had had to suspend An-70 trials as the project’s chief partner, the Russian Defense Ministry, had again cast doubt on its participation in the project.

“We agreed [with Russia] to resume cooperation on the An-70 project and started working on it. Now certain Russian officials are saying that they are going to build their own military transport aircraft. In these circumstances, Ukraine will be forced to continue working, to continue bearing expenses on its own, but we will build this aircraft,” the Ukrainian government’s press service quoted Azarov as saying in a statement.

“The plane is currently undergoing flight testing. This is the final stage of the project,” the prime minister said, adding that he was confident his country would be able to launch serial production of the aircraft.

The Ukrainian-designed An-70, built jointly with Russia, is a medium-range propfan-powered transport plane intended to replace the ageing An-12 aircraft. The estimated price of one plane is about $67 million.

The project has had a long-running and troubled gestation period, with one prototype crashing in a collision in the 1990s, and a second crash-landing in Omsk in 2001. It has also had a history of problems related to its propfan engines.