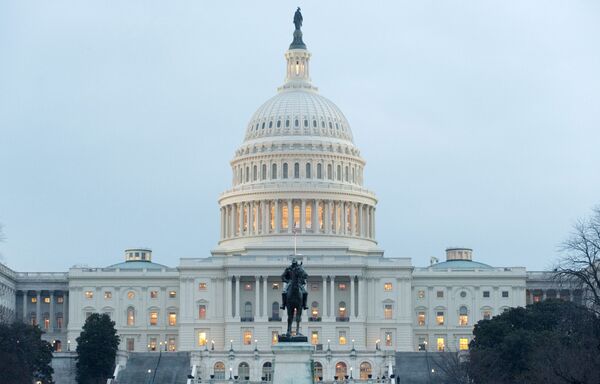 The United States on Friday released the names of 18 Russian officials to be slapped with visa and financial sanctions under the controversial Magnitsky Act, which punishes individuals Washington deems complicit in human rights abuses.

WASHINGTON, April 12 (By Carl Schreck for RIA Novosti) – The United States on Friday released the names of 18 Russians to be slapped with visa and financial sanctions under the controversial Magnitsky Act, which punishes Russians that Washington deems complicit in human rights abuses.

No senior federal Russian officials were included in the list published Friday on the website of the US Treasury Department, but a senior US State Department official told reporters that there is a separate classified blacklist of Russians as allowed by the Magnitsky Act.

The State Department official said he could not provide numbers or other information about the contents of the classified list, though he noted Russian officials on that document are being put only on a visa blacklist, while any US assets they may possess are not being frozen.

“You can’t do an asset ban in secret,” the official said.

The list made public contained no officials seen as part of Russian President Vladimir Putin’s inner circle. Moscow has repeatedly chided the United States for pushing through the Magnitsky legislation and warned that publishing the list of sanctioned officials would harm US-Russia ties.

Sixteen of the officials on the published list are individuals that the US government and Russian rights activists accuse of involvement in the 2009 death of Russian whistleblowing tax lawyer Sergei Magnitsky, after whom the US law is named.

These include investigators and officials in the Russian Interior Ministry, the Prosecutor General’s Office and Investigative Committee – as well as Russian tax and prison officials and judges – that Magnitsky’s supporters accuse of orchestrating a $230 million tax fraud purportedly uncovered by the lawyer.

Magnitsky died in the facility in disputed circumstances in November 2009.

One of those is Lecha Bogatyryov, whom Austrian prosecutors accuse of shooting and killing an exiled Chechen critic of Chechen leader Ramzan Kadyrov in Vienna in 2009. Austrian authorities convicted three Chechens for their role in that crime, though Bogatyryov remains at large.

Another is Kazbek Dukuzov, a suspect in the 2004 slaying in central Moscow of US journalist Paul Klebnikov, the editor of Russian Forbes.

The published list is considerably shorter than the 60 officials that Magnitsky Act author Benjamin Cardin, a US Senator from Maryland, has accused of involvement in the tax lawyer’s death.

Cardin said Friday, however, that the release of the names represents “a serious and historic first step.”

“With this concrete action, we send more than just a symbolic message that gross violators of human rights in Russia, and around the world, cannot escape the consequences of their actions even when their home country fails to act,” Cardin said in a statement.

The Magnitsky Act was signed into law by Obama on Dec. 14 and is ostensibly designed to punish officials believed to be connected to Magnitsky’s death. The scope of the legislation was later broadened to cover a whole range of suspected rights abusers.

Shortly after the Magnitsky Act came into force, Russia responded in part by banning US citizens from adopting Russian children. Officials in Moscow also defend the ban as a measure aimed at protecting Russian children from abuse at the hands of their adoptive American families, citing the deaths of 20 Russian adoptees in the United
States during the past two decades.

Initial reaction to the release of the Magnitsky List from politicians in Moscow was mixed, with one senior lawmaker warning of a possible further deterioration of bilateral ties, while another seemed to downplay the impact of the US move.

Alexei Pushkov, head of the Russian State Duma’s international affairs committee, said the Magnitsky Act effectively “buries the idea and the concept” of the so-called “reset” policy of US-Russia ties undertaken by Obama and former Russian President Dmitry Medvedev in 2009.

The US law “will be present, possibly, for a very long time in our relations and will poison them,” Pushkov said.

Leonid Slutsky, chairman of the Duma’s committee on relations with the countries of the former Soviet Union, took a less combative tone, saying that the release of the Magnitsky List “doesn’t help in building constructive relations.”

“Nonetheless, it proves that tension on this issue is not rising,” Slutsky said.

Russia is expected this weekend to publish its own list of US citizens Moscow says have violated the rights of Russians.

Asked about Russia’s anticipated response to the Magnitsky List, White House spokesman Jay Carney told a news briefing Friday that human rights is “an issue that we have disagreements with [Russia] on at times, and we are very frank and candid about that.

“We have our differences with Russia. We make them clear,” Carney said.

Updated with background and comments from a senior State Department official, White House spokesman Jay Carney, and US and Russian lawmakers.