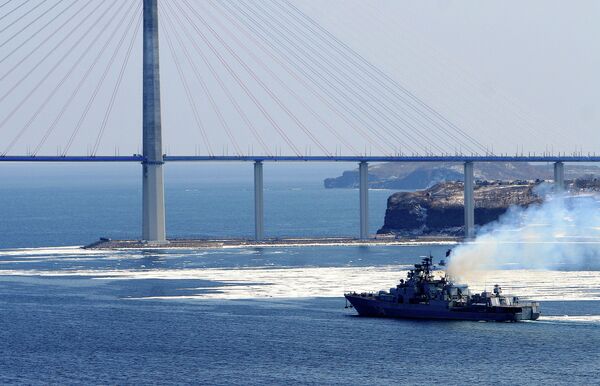 At the moment, Northern and Baltic Fleet warships performing their missions in the Mediterranean are the Severomorsk large ASW ship, the frigate Yaroslav Mudry, the salvage/rescue tugs Altai and SB-921 and the Lena tanker, he said.

A group of warships, including the destroyer Admiral Panteleyev, the Peresvet and the Admiral Nevelsky amphibious warfare ships, the Pechenga tanker and the salvage/rescue tug Fotiy Krylov left the South China Sea and is headed for the Suez Canal, the ministry said.

The group is due to enter the Suez Canal in mid-May, the ministry added.

A senior Defense Ministry official said the Mediterranean task force will comprise 25 officers as part of its command and control system, and that the command and control agencies will be based either in Novorossiysk, Russia, or in Sevastopol, Ukraine.

Adm. Vladimir Komoyedov, head of the parliamentary defense committee, previously told RIA Novosti that the Mediterranean task force should be comprised of 10 warships and support vessels as part of several tactical groups - attack, antisubmarine and minesweeping.