Former US Rep. Gets Rare Honor from Putin 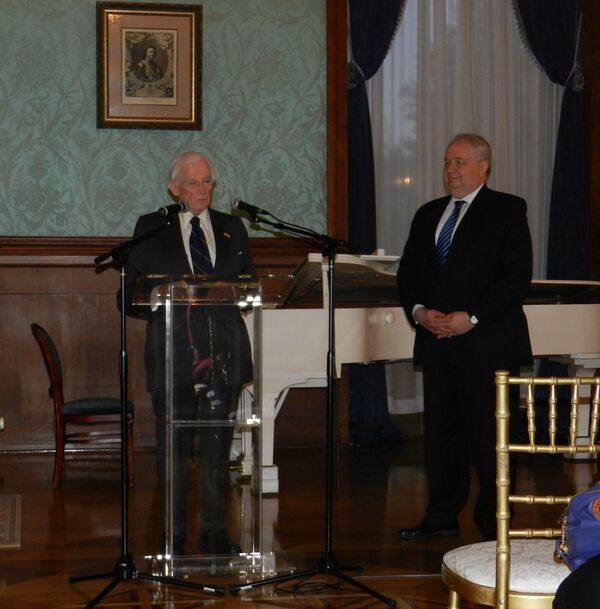 Washington attorney and former US Congressman James Symington received a Certificate of Merit – signed by Russian President Vladimir Putin – at the Russian Embassy in Washington Thursday night, for his contributions to Russian-American culture and humanitarian work, and for fostering strong US-Russian relations.

WASHINGTON, April 12 (By Maria Young for RIA Novosti) – Washington attorney and former US Congressman James Symington received a Certificate of Merit – signed by Russian President Vladimir Putin – at the Russian Embassy in Washington Thursday night, for his contributions to Russian-American culture and humanitarian work, and for fostering strong US-Russian relations.

“It is impossible to say just one thing that he has done for our two countries. This is a lifetime achievement award for more than 20 years of working – without asking a thing in return – to promote knowledge, culture and cooperation between the United States and Russia,” said Ambassador Sergey Kislyak, Russia’s top envoy to the United States, in an interview with RIA Novosti.

“It is extremely rare for foreigners to receive such an award,” he added, and said Symington had worked for decades to bring American and Russian people together, “regardless of the big differences” between the two countries.

Symington told a crowd gathered for the ceremony that he first developed a love for the Russian people when he traveled to Moscow as a student in 1958, “and it just seemed our two countries ought to be friends,” he said.

Back in Washington Symington held a series of government positions and was later elected to four terms representing Missouri’s second district in the US House of Representatives, where he chaired the subcommittee on International Cooperation.

Symington was also part of a group that founded the nonprofit American-Russian Cultural Cooperation Foundation in 1992, to support increased cultural exchange between the US and Russia, and is now chairman of the board.

In 1996, he led an initiative to erect a bronze statue of Alexander Pushkin in Washington, considered to be one of Russia’s greatest poets and the founder of modern Russian literature. It was part of a cultural exchange between Washington and Moscow, and led to a statue of American poet Walt Whitman being erected in Moscow.

The world needs both the US and Russia, Symington said, and they need each other.

“This period we’re in today is a very important chapter in our two countries,” he said. “I know the people of Russia, and I know they want what we all want, and that’s peace, good humor, mutual respect, and growth.”

Contact between the people of Russia and the US should be everyone’s initiative, he said. “There are lots of people in both countries who are working very hard to foster good relations. But you bring people together, you throw in a little music, a little laughter, and that helps.”