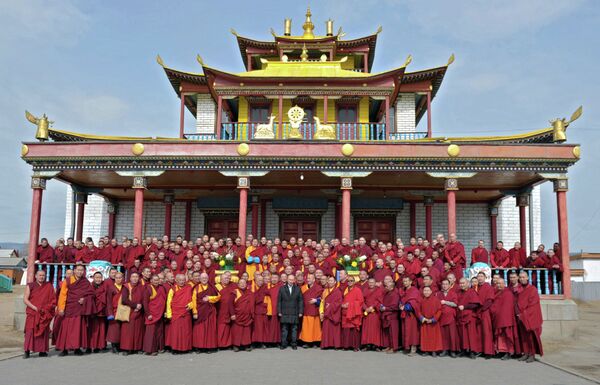 Russian President Vladimir Putin promised “100-percent support” for Russian Buddhists on Thursday during a visit to the country’s Buryatia republic, where about 20 percent of the population is Buddhist.

ULAN-UDE, April 11 (RIA Novosti) – Russian President Vladimir Putin promised “100-percent support” for Russian Buddhists on Thursday during a visit to the country’s Buryatia republic, where about 20 percent of the population is Buddhist.

Lama Damba Ayusheyev, head of the Buddhist Sangha of Russia, complained to the president that Buddhist universities often do not have state accreditation, and their students are drafted into the army for compulsory military service. Under Russian law, full-time university students are exempt from military service for the duration of their studies.

Putin suggested the students could be drafted for a few months in the summer during the course of their studies, as some Moscow university rectors have suggested. Lama Ayusheyev said that this would be “more acceptable.”

“Buddhism plays a significant role in Russia…It has always been that way. It is well known that the Buddhists helped during both world wars,” Putin told the lamas of the Ivolga datsan, Russia’s main Buddhist temple.

The president described Buddhism as a “kind, humanist learning based on love for others and love for one’s country,” and said he, the federal government and regional authorities were “always at [the Buddhists’] disposal and ready to support them.”

There are an estimated 700,000 to 1.5 million Buddhists in Russia, mainly in the republics of Buryatia, Kalmykia and Tuva.

Putin is also due to lead a meeting of the state council for problems of the timber industry during his visit to Buryatia, as well as visiting several timber-processing enterprises in the region.