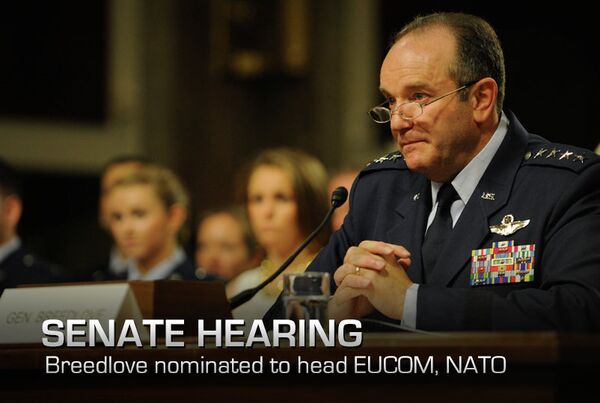 © US Air Force / Senior Airman Carlin Leslie
Subscribe
US President Barack Obama’s nominee to become supreme allied commander of the North Atlantic Treaty Organization (NATO) said Thursday that the United States should not pursue an antagonistic relationship with Moscow but rather one of partnership and reciprocity.

WASHINGTON, April 11 (RIA Novosti) – US President Barack Obama’s nominee to become supreme allied commander of the North Atlantic Treaty Organization (NATO) said Thursday that the United States should not pursue an antagonistic relationship with Moscow but rather one of partnership and reciprocity.

“I think we would be better off if we quit treating Russia, or thinking of Russia, as an enemy and try to bring them into a partnership as we deal with Europe and other places,” US Air Force Gen. Philip Breedlove told the US Senate’s armed services committee in a confirmation hearing Thursday.

Russia remains a “very important influence” with many nations on its periphery, which rely on Moscow in areas such as energy and transportation, Breedlove told the hearing, adding that Russia had been “very helpful” to Western forces in combatting piracy and “other things outside the European theater.”

“I think Russia still has deep influence in Europe,” Breedlove said. “We need to try to find out how to work with them.”

Fielding questions about US-Russia ties from Sen. Kelly Ayotte, a Republican from New Hampshire, Breedlove described Obama’s so-called “reset” policy with the Kremlin under former Russian President Dmitry Medvedev as “sort of on pause” given ongoing bilateral tensions over international adoptions, human rights and international conflicts such as the civil war in Syria.

“We had made some progress,” Breedlove said. “There were some political changes in Russia, and we are now sort of very much slowed down.”

He added, however, that Washington needs to “continue to reach out” to Moscow.

“The principle of reciprocity is how we need to think about our work with Russia,” Breedlove said. “But I don’t think we should stop. I think we need to keep working with them.”

Ayotte sharply criticized Russia in her questioning, using the word “outrageous” to describe Moscow’s decision to ban Americans from adopting Russian children in the wake of the US Magnitsky Act, which slaps visa and financial sanctions on Russian officials deemed by Washington to be complicit in human rights abuses.

She called Russia’s delivery of arms to the Syrian government “outrageous” as well. Russia has insisted that the deliveries are legal under international law and that it is not supplying Syria with offensive weapons.

In written testimony submitted to the Senate’s armed services committee prior to the hearing, Breedlove said Russia “will remain the primary actor of regional concern through 2020, by virtue of its geographic position, natural resource wealth, military forces, and desire for regional influence.”

“However, a number of systemic deficiencies, such as mounting internal stressors—politico-economic, socio-cultural, and demographic—will continue to challenge its aspirations,” Breedlove said in the written testimony.

Relations between the two countries have eroded precipitously since late last year, when Russia expelled the United States Agency for International Development (USAID) from the country.