Subscribe
A fresh leak of radioactive water has been detected at the crippled Fukushima nuclear power plant in northeast Japan, the plant’s operator said on Thursday.

TOKYO, April 11 (RIA Novosti) – A fresh leak of radioactive water has been detected at the crippled Fukushima nuclear power plant in northeast Japan, the plant’s operator said on Thursday.

“This time about 22 liters of radioactive water has leaked from a junction of the piping. The liquid has seeped into the soil,” Kyodo news agency cited plant operator Tokyo Electric Power Co. (TEPCO) as saying.

The fresh leak is the latest in a series of troubles at the nuclear power plant, which was hit by a massive earthquake and an ensuing tsunami in 2011.

Earlier on Thursday, TEPCO announced it will stop using all underground tanks to store radioactive water used in the plant's cooling systems and transfer the water to existing surface storage tanks.

Last week, the plant’s operator said about 120 tons of contaminated water might have escaped from another of the seven underground reservoir tanks.

TEPCO said, however, the amount of the fresh water leak was extremely small and the contaminated water was unlikely to flow into the sea.

In March 2011, Japan was hit by a massive 9.0-magnitude quake which caused a tsunami, claiming over 15,000 lives and triggering a number of explosions at the Fukushima Nuclear Power Plant.

The tsunami caused a partial meltdown at three of the nuclear plant’s reactors. Radiation leaked into the atmosphere, soil and seawater, making the accident the world's worst nuclear disaster after Chernobyl.

Japan will need at least 40 years to recover fully from the nuclear catastrophe, scientists say.

Some 315,000 victims are still living in a temporary housing as they are unable to return to their houses near the plant.

Fukushima’s cooling systems sustained a one-day power outage in late March. The incident was tentatively blamed on a rat which short-circuited a switchboard with its body. 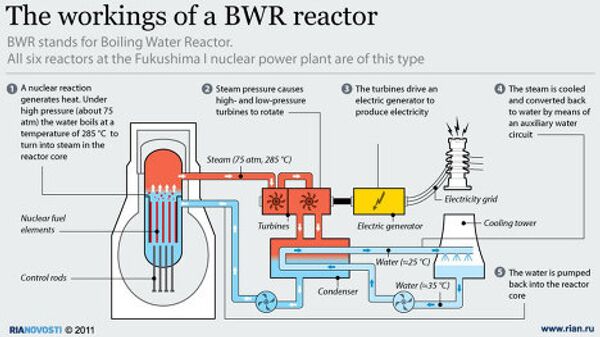 The Fukushima I nuclear power plant
© RIA Novosti
Newsfeed
0
New firstOld first
loader
LIVE
Заголовок открываемого материала
Access to the chat has been blocked for violating the rules . You will be able to participate again through:∞. If you do not agree with the blocking, please use the feedback form
The discussion is closed. You can participate in the discussion within 24 hours after the publication of the article.
To participate in the discussion
log in or register
loader
Chats
Заголовок открываемого материала
Worldwide
InternationalEnglishEnglishMundoEspañolSpanish
Europe
DeutschlandDeutschGermanFranceFrançaisFrenchΕλλάδαΕλληνικάGreekItaliaItalianoItalianČeská republikaČeštinaCzechPolskaPolskiPolishСрбиjаСрпскиSerbianLatvijaLatviešuLatvianLietuvaLietuviųLithuanianMoldovaMoldoveneascăMoldavianБеларусьБеларускiBelarusian
Transcaucasia
ԱրմենիաՀայերենArmenianАҧсныАҧсышәалаAbkhazХуссар ИрыстонИронауОssetianსაქართველოქართულიGeorgianAzərbaycanАzərbaycancaAzerbaijani
Middle East
Sputnik عربيArabicArabicTürkiyeTürkçeTurkishSputnik ایرانPersianPersianSputnik افغانستانDariDari
Central Asia
ҚазақстанҚазақ тіліKazakhКыргызстанКыргызчаKyrgyzOʻzbekistonЎзбекчаUzbekТоҷикистонТоҷикӣTajik
East & Southeast Asia
Việt NamTiếng ViệtVietnamese日本日本語Japanese中国中文Chinese
South America
BrasilPortuguêsPortuguese