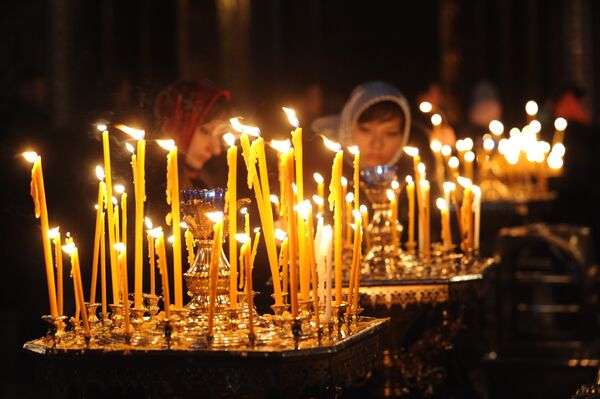 The Kremlin favors the idea of adopting a law protecting the religious feelings of Russian citizens, the Russian presidential spokesman said Thursday.

Russia’s lower house of parliament, the State Duma, passed the bill in the first reading on Tuesday.

“The Kremlin supports the idea of the law, and the wording of the law is up to the lawyers,” Dmitry Peskov said. “The law is very difficult to enforce but it is absolutely essential in this multi-national and multi-confessional country,” he said.

Peskov failed to answer a journalist’s question on how a person could be punished in Russia for desecrating a holy site, saying “this is a judicial practice issue.”

The first deputy of the State Duma Committee on Affairs of Public Associations and Religious Organizations, Mikhail Markelov, said some 80 percent of Russians support the law, according to an opinion poll.

Under the draft document, those who offend religious feelings at church services and ceremonies face up to three years in jail, fines of up to 300,000 rubles ($9,700) or 200 hours of compulsory community service.

Those Russians who insult religious feelings at holy sites face up to five years in jail, fines of up to 500,000 rubles ($16,500) or 400 hours of compulsory community service, the document says.

The bill was submitted for consideration in the State Duma in September 2012. The idea of introducing punishment for offending religious feelings came after members of the female band Pussy Riot performed an anti-Kremlin “punk prayer” at Moscow's Christ the Savior Cathedral last February.