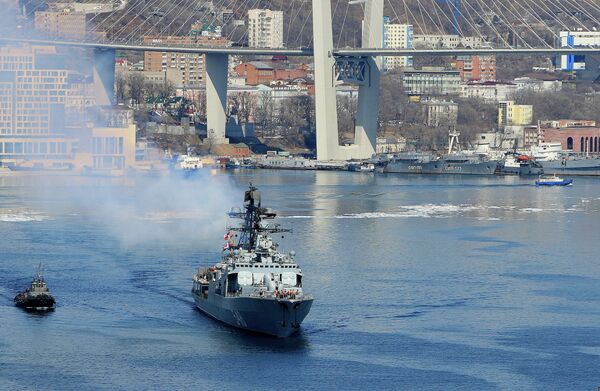 The task force comprises six vessels of the Pacific Fleet, including a destroyer carrying several helicopters, three amphibious warfare ships with marine detachments, a tanker and a tug.

The warships and the marines are doing daily drills during the trip, including artillery practices and searches for enemy submarines, the Pacific Fleet spokesman said.

The force, set to reach the Mediterranean by mid-May, will remain on permanent duty there to protect Russia’s interests in the region, Defense Minister Sergei Shoigu said earlier.

The Navy did not name any particular destinations for the Mediterranean task force, but Russia maintains a naval supply base in the city of Tartus in the war-torn Syria and has sent its warships there on several occasions since the outbreak of the Syrian conflict in March 2011, though never intervened.

Besieged Syrian President Bashar al-Assad, an ally of Moscow, was even alleged by Saudi media to be residing on a Russian warship for safety, though he denied the claim, also questioned by most experts.

The Mediterranean task force passed on Friday in the South China Sea another Pacific Fleet task force returning to its base from anti-piracy duty by East Africa’s shores, the fleet spokesman added.