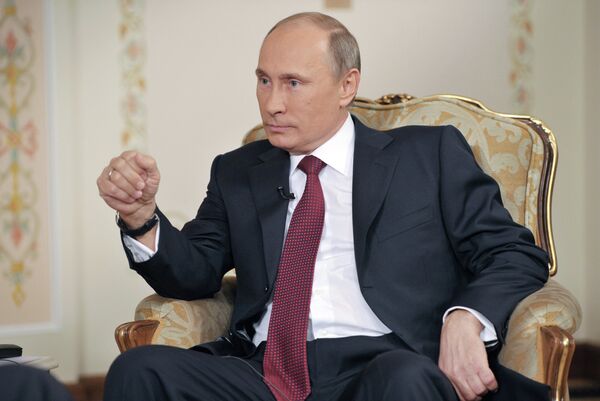 © RIA Novosti . Alexei Drouzhinin
/
Go to the mediabank
Subscribe
International
India
Africa
Russia is not looking to oust Syrian leader Bashar al-Assad and wants the conflicting parties to negotiate and stop the “massacre,” putting an end to the “catastrophe” in Syria, President Vladimir Putin said on Friday.

MOSCOW, April 5 (RIA Novosti) – Russia is not looking to oust Syrian leader Bashar al-Assad and wants the conflicting parties to negotiate and stop the “massacre,” putting an end to the “catastrophe” in Syria, President Vladimir Putin said on Friday.

“We do not think that Assad should leave today, as our partners suggest. In this case, tomorrow we will have to decide what to do and where to go,” Putin told German broadcaster ARD in an interview at his Novo-Ogarevo residence near Moscow.

He cited Libya as an example, which, according to him, “has already split into three parts.”

“We don't want a situation that is just as difficult as in Iraq. We do not want to have a situation of the same difficulty as in Yemen, and so on,” he said.

Rebels in Libya, some of them members of Islamist groups, ousted and killed long-standing dictator Muammar Gaddafi in October 2011, after a months-long uprising in which they received assistance from NATO forces.

“We believe it is necessary to sit everyone down at the negotiating table, so that all warring parties could reach an agreement on how their interests will be protected and in what way they will participate in the future governance of the country,” he said.

Putin also reiterated that Russian supplies of weapons to Syria are legal, while supplying arms to rebels fighting the authorities contradicts international norms and laws.

“First of all, there are no bans on arms supplies to incumbent legitimate governments. Secondly, only recently the opposition received 3.5 tons of arms and ammunition through airports near Syria,” he said referring to an article in The New York Times last week.

“There are international legal norms stating that it is inadmissible to supply arms to armed groups that strive to destabilize the situation in a certain country with the use of weapons,” he added.

Last week, The New York Times reported that the United States has recently been assisting Turkey and Arab nations in boosting their arms deliveries to Syrian rebels.

Putin also said that French President Francois Hollande, who visited Moscow last month, has interesting ideas on how to solve the ongoing conflict in Syria, and Russia is ready to support them.

“I think he has some interesting ideas that can be implemented, but it requires some diplomatic work. We are ready to support these ideas. We need to try and put them into practice,” Putin said.

About 70,000 people have died in Syria since the start of the uprising against president Assad in March 2011, according to UN estimates.