Russia Will Not Stray From Democracy’s Path - Putin 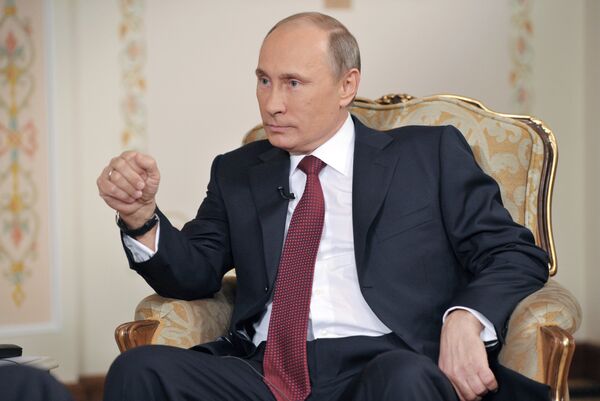 © RIA Novosti . Alexei Drouzhinin
Subscribe
President Vladimir Putin insisted on Friday that the Kremlin was committed to the goal of democratic development, but said Russia needs more time to overcome the legacy of almost 70 years of Soviet rule.

MOSCOW, April 5 (RIA Novosti) – President Vladimir Putin insisted on Friday that the Kremlin was committed to the goal of democratic development, but said Russia needs more time to overcome the legacy of almost 70 years of Soviet rule.

“It is obvious that we have made a decisive choice for democracy and we cannot imagine any other path of development,” Putin told the German broadcaster ARD in an interview at his Novo-Ogarevo residence near Moscow.

“Just compare the situation in the Soviet Union and in modern Russia in terms of the development of the economy, political sphere, and all other areas associated with democracy,” he said. “The difference is colossal. But do you want us to cover in two decades a path that it took other countries 200, 300, 400 years to cover?”

Putin, who has faced accusations of a clampdown on dissent since his return to the presidency last year, also dismissed international concerns over the unannounced inspections of hundreds of non-governmental organizations across Russia in recent weeks.

Russian rights activists say the raids, including inspections of the Moscow offices of Amnesty International, Human Rights Watch and Memorial, are intended to scare NGOs funded from abroad and engaged in “political activities” into complying with a controversial law that obliges them to register as “foreign agents.” NGOs say the term is a synonym for “spy” and will discredit them in the eyes of the public.

But Putin dismissed what he called “alarmist” media reports about the law.

“Organizations financed from abroad are not forbidden to carry out any type of activities, including domestic political activity,” he said. The only thing we want to know is who receives the money and where it goes.”

He alleged “almost $1 billion” had been pumped into NGOs from abroad in the four months since the adoption of the law.

“Should our society not be informed of who gets the money and for what purposes?” he asked.

Putin also denied there was anything sinister about the inspections of the NGOs, pointing out that no one had been detained during the raids.

He also said the law on NGOs was based on the Foreign Agents Registration Act, a law passed by the US Congress in 1938 that remains on the books today. But rights groups say the US law was specifically approved to deal with the threat of Nazism, and concerns only the activities of foreign intelligence agencies, rather than human rights and environmental activists who receive funding from abroad.

Russia’s leader also said the authorities were encouraging “political competition,” citing recent reforms on the registration of political parties and the return – albeit with a Kremlin filter – of direct gubernatorial elections.

“Without competition, no development in either the economy or in politics is possible today,” he said. “But this does not mean that the opposition should be financed from abroad.”

Putin was speaking ahead of an April 7-8 visit to Germany, where he is expected to face questions from German Chancellor Angela Merkel over the inspections of NGOs, including a number of German organizations.

"Our foundations and their partners in Russian society play an important role in the development of German-Russian relations," German government spokesman Steffen Seibert said last week. "Measures that impair their work or criminalize them damage our relations.”

The criticism comes amid a cooling of once warm ties between Moscow and Berlin. Germany has frequently expressed concern over the rights situation in Putin’s Russia.