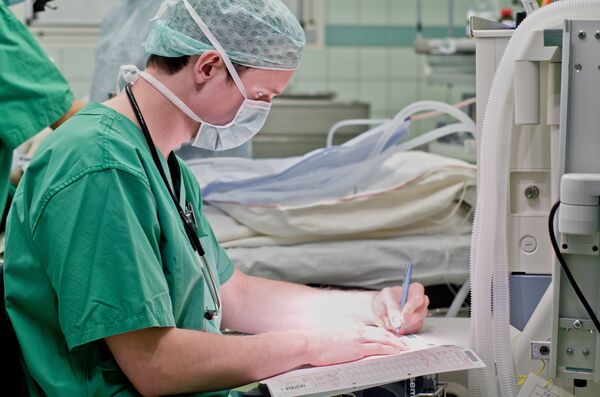 Cancer clinics in the United States have begun turning away older patients as the federal mandatory budget cuts known as “the sequester” slash Medicare reimbursements for potentially life-saving chemotherapy drugs.

“Other practices are in total disbelief and will be hit over the head in a week or so when payment claims they put in to Medicare come back with a two-percent cut,” Okon said, calling the sequester cuts “a blunt ax” being wielded with little thought.

A study conducted by COA two weeks before the sequester cuts on Medicare took effect found that they would force nearly three-quarters of cancer clinics to turn away new Medicare patients or send all Medicare patients to hospitals for more expensive treatment.

Doctors at the Zangmeister Center, a cancer treatment facility in Columbus, Ohio, will meet Friday to discuss how to handle the cuts, Dr. Mark Thompson told RIA Novosti.

“But if we shift patients to hospitals for care, it will cost the government way more to have them treated,” he said.

“The last thing this country needs is moving expensive care like cancer care into an even more expensive setting, like hospitals.”

A study conducted by health care consultants Milliman for the US Oncology Network found that chemotherapy cost around $600 per month more when administered in a hospital than when the treatment is provided in a clinic like Zangmeister or a doctor’s office.

About 8 million of the almost 14 million Americans living with cancer are over age 65 and around half of cancer care expenditures are for Medicare recipients, the Milliman study says.

The way Medicare cancer treatment costs are reimbursed to doctors is complicated. The US government typically pays back to oncologists and clinics the price of a chemotherapy drug, plus six percent to cover the costs of storage, staff needed to administer the drugs, and other expenses.

But the sequester cuts apply across the board, including to the cost of the drug. That means that, if a practice buys a drug for $100, it only gets $98 back, and that “puts us at risk of not being able to pay our bills,” said Thompson. "That might not seem like a big loss, but we buy millions of dollars of these drugs, and across a lot of drugs, that's a lot of money."

“Oncologists cannot continue to buy drugs and get paid less than they cost us,” he said.

“We’ve been trying not to shift patients (to a hospital for care) but we’re going to have to look at that now.”

Part of the problem, said Okon, is that few expected the sequester cuts to be applied to Medicare.

“Everyone was taken by surprise that this was implemented, even the government committee in charge of Medicare reimbursements.”

“Now, we’re like deer in the headlights and we don’t know what to make of it.”